Power of the sunshine alliance

Power of the sunshine alliance


Climate change is recognised as the greatest challenge of our time. As the global community seeks measures to urgently counteract and reverse its proven catastrophic impacts, India has led with the initiative of the International Solar Alliance (ISA), initially targeting 122 countries lying between the Tropics of Cancer and Capricorn, which are endowed with plentiful sunshine ideally suited to generate clean solar energy on a massive scale. This is intended to mitigate the deleterious reliance on fossil fuels and also contribute to Sustainable Development Goal 7 (SDG-7), which aims to “ensure access to affordable, reliable, sustainable and modern energy for all” by 2030.

This innovative idea, mooted by Indian Prime Minister Narendra Modi for the “sunshine states” or “Surya Putras” (sons on the Sun) was jointly launched by him and former French President Francois Hollande at the UN Climate Change Conference, COP -21, in Paris in November, 2015, as a major initiative for the implementation of the Paris Climate Agreement. It has since evolved into a treaty-based intergovernmental organisation headquartered in Gurugram, India, with 87 signatories to the Framework Agreement and 67 States Parties. After the successful launch and growing global appeal of the ISA, it has now moved towards universalisation by throwing open its membership to all member states of the UN.

The evolution of the ISA from concept to operationalisation was realised in record time, driven by the urgent need for action. The Framework Agreement, which was negotiated with wide participation of interested countries, was opened for signature in Marrakesh, Morocco, in November, 2016.  The founding Summit Conference of the ISA was held in New Delhi in March 2018 with the participation of President Emmanuel Macron of France and 22 other heads of nations, where PM Modi presented 10 action points for the ISA. These included the availability of affordable solar technology across the world through concessional financing, encouragement to innovation, enhancing photovoltaic cell-generated electricity and drawing up standards and regulations in support of the initiative. The first General Assembly of the ISA was held in New Delhi in October 2018, and was inaugurated by PM Modi and UN Secretary General Antonio Guterres.

In his address to the Assembly, the UN Secretary General welcomed the ISA initiative as being “exactly the need of the hour” and representing the future of the global energy scenario, while applauding the ambitious goals of mobilising USD 1 trillion and the deployment of 1,000 GW of solar energy by 2030. The Framework Agreement of the ISA is registered with the UN as an international treaty and the organisation has established declarations of cooperation with several multilateral institutions including IRENA, World Bank, ADB, UNEP and UNDP. The ISA, however, does not intend to duplicate the efforts that other existing bodies are engaged in, but seeks to establish networks to “develop synergies with them and supplement their efforts in a sustainable and focussed manner”, according to the ISA website.

The ISA is actively enabling and accelerating the collective response of deployment and use of solar energy, which, according to estimates, is contributing more than 2.8 per cent of global electricity today. If the ISA’s aim of generating at least 1,000 GW by 2030 is successful, solar power will become the most important source of energy for electricity production in large parts of the world. According to RK Singh, Minister of State (Independent Charge) of the Ministry of Power, Minister of State (Independent Charge) of the Ministry of New and Renewable Energy and Minister of State in the Ministry of Skill Development and Entrepreneurship, Government of India, “a robust pipeline of more than USD 5 billion has been developed for solar energy application to meet lighting, irrigation, drinking water and productive energy requirements of the ISA member countries, which have so far been deprived of modern energy services”.

The ISA is working towards its goals by partnering governments and organisations to create impactful projects around the world. To cite a few examples, ISA is working with WRI (World Resources Institute) to develop a roadmap for mobilisation of solar energy applications in transportation and cooling. In wake of the Covid-19 pandemic, ISA has responded by setting up ISA CARES, an initiative dedicated to the deployment of solar energy in the healthcare sector. This initiative aims to solarise one primary healthcare centre in each district of target member countries. ISA has also undertaken a Demand Aggregation Initiative for 47 million solar home systems and 250 million LED lamps in ISA member countries, which was launched in August, 2020. The ISA is committed to making the costs of solar power more affordable for remote and inaccessible communities. In partnership with the World Bank, it has launched the Global Solar Atlas, which displays annual average solar power potential at any location in the world and, thus, identifies potential sites for solar power generation. In June, 2019, the Commonwealth of Nations and the ISA signed an MoU to expand solar power in the Commonwealth member countries. 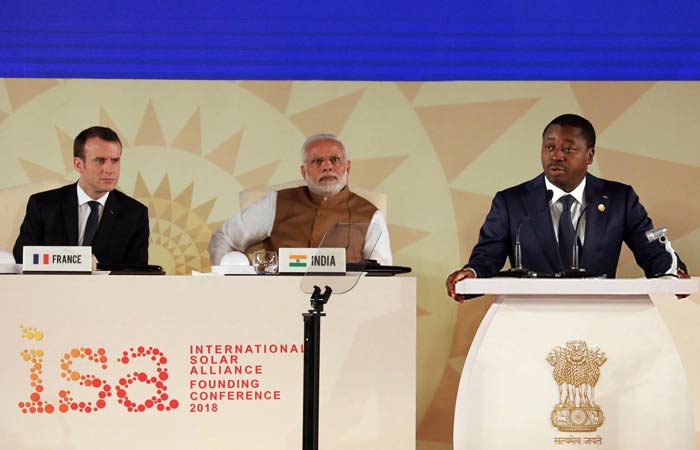 As the ISA works with developing countries to find cost-effective and efficacious means of switching to low-carbon growth, India has led by example, pledging to generate 100 GW of solar energy in its target of 175 GW of power from renewable energy sources, to instal rooftop solar projects of 40 GW by March, 2022, and reduce its emission intensity by 33-35 per cent, and to generate 40 per cent of its electricity from renewable energy by 2030. India has established 42 solar parks all over the country and solar power capacity in India has grown tenfold in the past five years, according to some estimates. A key threshold was crossed in 2018 with solar power becoming cheaper than coal for electricity generation. This has been a great impetus to meet and cross the targets for solar power generation set by the government.

India also plans a World Solar Bank, which will pool resources to the tune of USD 10 billion from across the globe and use them to fund solar projects in ISA member countries. This will help projects in India, and across the world, in areas like creation of advanced storage applications, manufacture of solar photovoltaic cells for batteries and other solar products. At the third ISA General Assembly held virtually on October 14, 2020, attended by ministers from 34 member states, India and France were re-elected as president and co-president of the ISA, respectively, for a further term of two years. India will strive to work with other member states of ISA to realise the vision of PM Modi, reiterated in his Independence day address in August, 2020, of having “One Sun, one world, one grid” (OSOWOG) with a trans-national electricity grid supplying solar power across the globe.