Where the Blue Lord Resides

Where the Blue Lord Resides


Pichvai art of Nathdwara, Rajasthan, depicts glorious tales from Lord Krishna’s life and has survived over centuries due to the vibrancy of its compositions and adaptability of themes.

Where else can you find the perfect harmony of beauty and devotion except a pichvai (pichwai) painting? Pichvai painting, commonly known as pichvai, is an ancient Indian art form originating from Nathdwara, a small town near Udaipur in Rajasthan. Extremely intricate and sophisticated, these life-size paintings were done on cloth and depicted stories from the life of Lord Krishna, who is also referred to as the blue god. They were traditionally hung behind the idol of Srinathji (a manifestation of the lord as a seven-year-old) in the eponymous temple in Nathdwara to enhance the beauty of the shrine. Here, the deity is treated like a living image and is attended to with such daily normal rituals as bathing, dressing, resting at regular intervals and is even offered meals, which is later distributed amongst devotees as prasad (devotional offering). Since the deity is worshipped as the child form of Lord Krishna, he is tended to with utmost care, and these are what pichvais reflect. Says Pooja Singhal, founder of Pichvai Tradition & Beyond, an organisation working towards the revival of this classical art form, “The miniature tradition of pichvais has a long history, with roots in the medieval religious Vaishnavite cult of the 16th century.

A combination of pich (back) and wai (hanging), pichvais developed as part of a larger ensemble of the Vallabhacharya (of the Vaishnavite Pushti Marg sect) elaborate temple rituals, combining aesthetic practices with the spiritual through temple decoration, idol ornamentation and grand festivities.” When the tradition of pichvai painting began, about five artists were allowed to visit the holy darshan (viewing) of Srinathji for a few minutes during the time of his dincharya or daily ritual. Every darshan was an elaborate ritual for which his clothes were changed by his sevaks (attending devotee). These rituals were captured beautifully in paintings with focus on the intricate attires donned by Him, rich with bright colours, enclosed by dark borders and full of pure gold decoration. The delicate form with multiple compositions and meticulous detailing demonstrated a proficiency that was passed through generations from father to son. Soon it became an art form, which not only depicted what was going on in the temple and served as a decorative wall hanging for the idol, but also began to depict the life of the lord. Pilgrims took these paintings back home to worship and non pilgrims bought them as a decorative art pieces for their homes.

Exhibited at prestigious forums like the Kochi Biennale,  India Art
Fair – Pichvais continue to survive and wow the art connoisseur

Explains Singhal, “Initially, pichvais were designed with exquisite geometrical and floral patterns around empty spaces at the centre, against which the temple idol was placed. However, over the last century, the painted textiles that left the shrine took on a new role as wall art and was much sought after by the cognoscenti for their effervescent aesthetics and gradually spawned a new pursuit among collectors. Later in the 20th century, with the coming of photography and a rising interest in portraiture, pichvais transformed into figurative and narrative forms. An elaborate yet rigid iconography developed, depicting a wide range of themes, typically episodes from the ancient text of Bhagwata Purana and scenes from Lord Krishna’s childhood.”

” Over the years, there has been a decline in the art form, driven by the dual impact of reduced patronage and the demand of the pilgrims for cheaper thus poor quality paintings. It is almost impossible to recreate the intricate design and creative balance that is a trademark of an authentic Pichvai painting. Another reason is the unwillingness of the younger generation of artists to subject themselves to the discipline and rigour of training required to become a master Pichvai painter. Considered to evoke a deep sense of calm and devotion, in terms of aesthetics a Pichvai is no different from any other art form that one invests in. “

Apart from the Nathdwara pichvais, there are also the Deccani pichvais which are much rarer, particularly the kalamkari ones. Deccani pichvais were made for wealthy Gujarati merchants, settled in Hyderabad for reasons of trade and commerce, who commissioned them for their personal shrines or to offer at the Shrinathji temple. While kalamkari pichvais are no longer made, the pigment-painted pichvais tradition is alive in Rajasthan. Although this traditional art form has moved from its association with the divinity, it has taken a turn to inspire and influence contemporary lifestyle. Works of pichvai continue to grace the walls – of art connoisseurs, those with an affinity towards classical

Indian art and even the younger generation – albeit with contemporary touches and renditions in terms of the colours used, composition and sometimes the features of Srinathji. The size too has undergone a change – from the original 10-12 ft to 2-4 ft – to suit a modern home. One can also find more versatile formats to suit smaller apartment walls, niches and corners, making this art form more approachable and relevant to the new buyer. And it doesn’t end there. Indian fashion designers too are incorporating elements and motifs of pichvais into their creations. Take Rohit Bal for instance. A few years ago, the celebrated designer collaborated with design house Good Earth to create a limited edition collection of ensembles and home dОcor titled Husn-e-Taairaat that featured lotuses, long-tailed peacocks, fruits, flora and fauna – all rendered in vintage pichvai painting style. Chennai-based fashion house WeaveinIndia also boasts creations inspired by the pearl-studded borders and garden motifs of pichvais. Thankfully, fuelled by the efforts of newer patrons – like Singhal who has exhibited pichvais at various prestigious forums like the Kochi Biennale, India Art Fair and at various exhibitions in New Delhi – pichvais continue to survive and wow the art connoisseur. 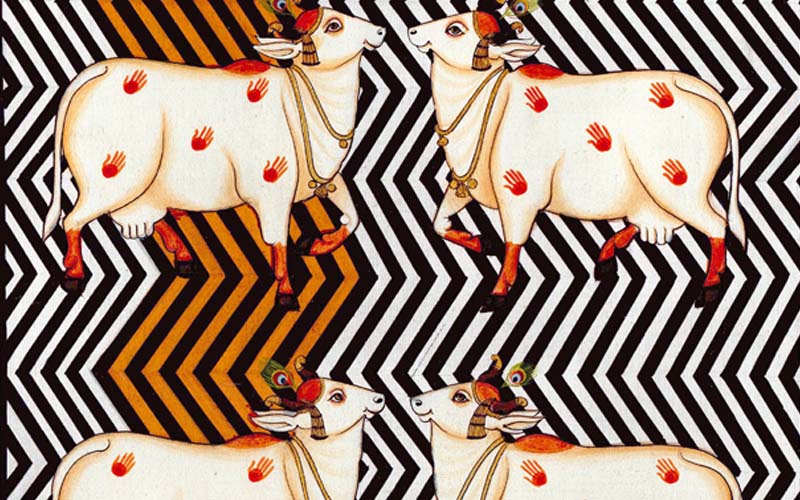 A former senior journalist, Punam Goel is an art enthusiast with over 15 years of experience in documenting, researching and writing about independent art consultancy, exhibition design and various artforms.

The Swami’s progress
×
Tweets by MEAIndia