The Indus Valley Civilization is believed to be one of the oldests harbinger of organized communal life and settlement in the world. Also known as the Harappan Civilization, it was from 2600 to 1900 BC that this system was at its flourishing peak, with a sophisticated and technologically advanced urban cultural centre for that era.

In India, the most marvellous remains of the Bronze Age urban culture can be discovered at Rakhigarhi in Haryana, Kalibangan in Rajasthan, Rupar in Punjab and Dholavira and Lothal in Gujarat. Lothal was the far southern outpost of the Harappan Civilization and a strategic port city for the trade of beads, gems and ornaments to the rest of the world. 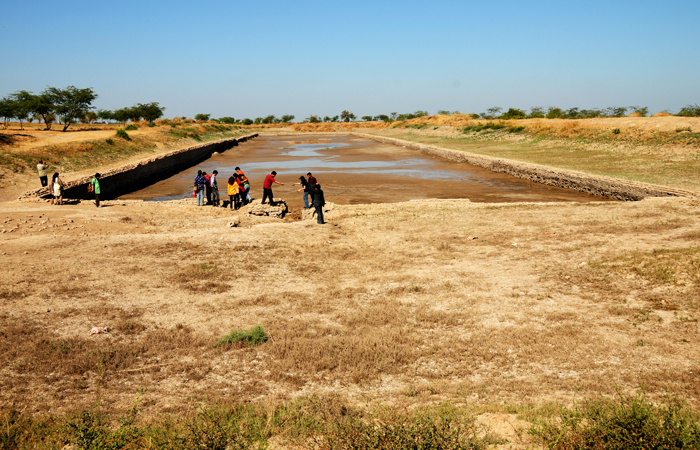 The city was unearthed between 1955 and 1960 by the Archaeological Survey of India (ASI), and is local in the Bhal region of present-day Gujarat. The urban port boasted of a well-planned city scheme, which can be closely studied through the insights preserved at the ASI museum. The exhibits include ceramic finery, metalware and beadwork that had been created here centuries ago.

Made from bronze, copper, stone, chert, shells and bones, these riches are mirrors of the finest historical craftsmanship. The museum showcases the uniformity of weights and measures used during the Harappan civilization — bricks in perfect ratio and weights based on units of 0.05, 0.1, 1.2, 5, 10, 20, 50, 100, 200 and 500, with each unit weighing around 28 g, similar to the English ounce or Greek uncia. More compact objects were weighed in similar ratios with units of 0.871.
According to ASI, Lothal also had another series of weights that conformed to the Heavy Assyrian standards for international trade. In addition to these, the institution is home to seals and toys reflecting trade with Persian Gulf and African ports. The main exports were beads, ivory and shells in the form of fine objects sitting as exquisite exhibits: a gold necklace, a copper figure, micro-beads, steatite and terracotta seals with motifs and inscriptions, metal fishhooks, ornaments like bangles, a perforated jar, a terra cotta bull, a horse, the model of a boat, objects used for games and a shell used as a compass for navigation. Archaeologists have also uncovered two fascinating styles of pottery at Lothal.

It was the strategic position of the land that offers the most plausible explanation for its development as a trade centre. Surrounded by a sheltered harbour along the Bhugavo River and the Gulf of Khambatt, and gifted with fertile soil of the region called Bhal, Lothal was ideal for growing grain and cotton, and the thriving bead-making industry in the Khambatt coastal region. On surveying the excavations, visitors can see the tank which many experts believe to be the world’s first dry dockyard. Suffering constant floods in Sindh and acknowledging the power of high tides in the Gulf of Cambay, the Harappans are said to have built this dock inland, with a canal connecting to the estuary of River Sabarmati. The dock spans 37 m from east to west and 22 m from north to south. This illustrated a demonstrated knowledge of tides, hydraulics and the effect of seawater on bricks. The museum observes that ships could sluice into the northern end of the dock by an inlet channel connected to the estuary of River Sabarmati during high tide, and the lock gates were shut so the water level would rise adequately for them to float. Once the ships had loaded or unloaded cargo, the gates were opened for them to return to the sea. The tank’s dimensions suggest that the dock could house 60 ships of 30 tonnes each, a rare feat for the era.


The dexterity of design extends to the warehouses near the dockyard, which were set on a 3.5 m high plinth. The cubical blocks used for warehousing were connected by passages built from kiln-fired bricks. Closely situated is the acropolis where the rich and powerful resided, enjoying plush, paved baths, sophisticated underground and surface drainage facilities, and a drinking well. The ruins reveal a mansion on the acropolis, and the proximity of the seat of power to the warehouse ensured that a powerful person, perhaps a ruler, could supervise stocks easily from this vantage point.

In the lower parts of the township lay the commercial and residential areas. The major streets that led from north to south were possibly dotted with shops, trader dwellings and artisans’ workshops while the roads running from east to west led to the housing areas with tracks allowing access to individual homes. The bead factories accounted for the main industry of the Harappans, with agate and other semi-precious stones galore.


A noteworthy feature of the plan was the underground sanitary drainage. The main sewer, 1.5 m deep and 91 cm across, connected across north-south and east-west, and was constructed from a chain of smoothened brickwork. Skillful masonry kept the sewer impermeable and descents at regular intervals acted as an automatic cleaning mechanism. A wooden screen at the end of the channels held back solid wastes and fluids entered a cess pool made from radial bricks.