the recent technological advancements in india reflect not only the immense youthful energy and innovation in the country, but also substantial reforms undertaken by governments, and enabling platforms created by public-private partnerships. Here are some recent developments based on coordination among public and private sectors.

India’s innovation ecosystem has grown by leaps and bounds in the last few years. It is currently ranked third in the world, with more than 50,000 startups and more than 500 incubators estimated around the country. More than just numbers, it is the astoundingly wide range of new services, products and technologies deployed by startups that attest to the strength of the country’s ecosystem. These innovation have directly or indirectly re-envisioned the future for a variety of sectors like financial transactions, shopping and retail, urban transport and office commute, and many more.

For thousands of years of recorded history to date, money was seen only in the form of currency notes and coins, of various sizes, materials, shapes and colours. Over the recent years, the speed of transformation in the financial sphere has seen exponential growth. Take for example instruments such as cheques and bank drafts that only appeared in the last few decades and have already become almost obsolete. In India, it is common these days to pay for our daily essentials like phones and TV, our commute, or even a cup of our favourite ice cream by scanning a QR code or entering an email address- like string called the VPA. More than a billion transactions a month are carried out on UPI. It is foreseeable that within a few generations, all currency notes and coins would be visible only in museums or history books. Digital technologies such as smartphones and affordable online connectivity have enabled changes in how money manifests itself.

Transfer of money from the consumers’ wallet to the vendor’s bank account is enabled by a system called the Universal Payment Interface or UPI. This UPI system is enabled and administered by the National Payments Corporation of India Ltd, a public private partnership of all of India’s banks. This payment layer can connect every bank account in the country to every other, through a simple virtual payment address (VPA) that looks like an email address, or the aforementioned QR codes. The very design of the UPI made space for private innovation and therefore its success has driven by a plethora of private companies building interface layers or transaction apps for consumers to use the system seamlessly and as a matter of habit and preference over currency. 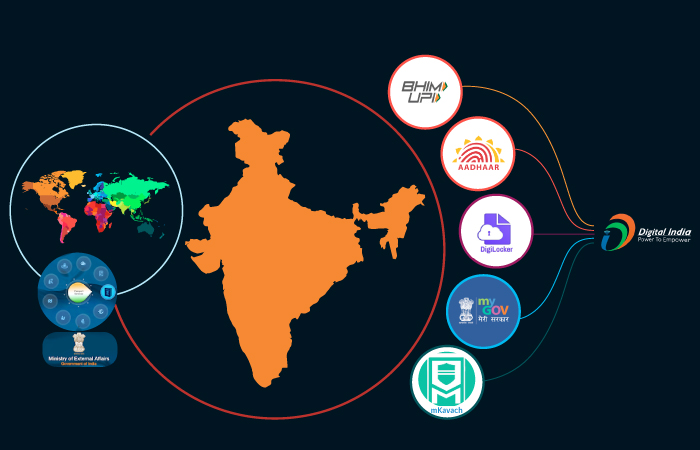 In recent weeks and months, India’s fight against the global pandemic of COVID-19 was significantly strengthened by a tracking and tracing app called AarogyaSetu (Aarogyameaning a state free of disease and Setu meaning a bridge), designed quickly and promptly by a collaborative team comprising of professionals from NITI Aayog, Ministry of Information Technology, and India’s top startups. This app established a record of rapid adoption, racing to 50 million users in just 13 days, allowing Indian citizens to keep abreast of COVID-19 in their locality or region, and also access other services. Similarly, a massive effort is underway to establish the Indian National Digital Health Mission (NDHM), which will provide a personal health ID to each citizen, connecting each to the medical system, while ensuring portability, privacy, fraud prevention, and grievance redressal. NDHM will have the IT backbone and governing rules, but the interface layers will be provided by the private sector, bringing in innovation, user- customisation, and lowering of costs for consumers.

UPI and AarogyaSetu are just two of several examples of how the public and innovation systems have come together for changing lives of Indian citizens. Many more such changes can be expected in coming months and years.In the month of July 2020, a new public-private collaboration, called the Open Credit Enablement Network (OECN) was also launched. It will enable easier credit for Indian consumers, and will allow lenders and marketplaces to create innovative products for financial credit at a large scale. This will be done through a common platform utilising a shared language base and ushering in uniformity. As part of Prime Minister Narendra Modi’s groundbreaking reforms under the AtmaNirbhar Bharat initiative to make India self-reliant, the Indian space sector has been reformed and restructured, to enable participation of the private sector and startups in this exciting new frontier that combines science, technology and innovation. The Indian Space Research Organisation (ISRO) is focussing on new research or new missions, while private entities will take the onus of providing space- based services at reasonable cost and maximum efficiency. This reform will attract Indian innovators to apply their knowledge and efforts to the space sector, and make India a leading partner in the rapidly- expanding avenue of space science and its public applications.

In all these sectors, the common underlying theme has been visionary reforms and enabling support from the government or public sectors, upon which the entrepreneurs of India have built products and services. This model shall be the bedrock of AtmaNirbhar Bharat, and take Indian science, technology and innovation to new heights.

Mudit Narain is currently an OSD in the Office of the Principal Scientific Advisor to the Govt of India. He holds two masters degrees in engineering and public policy from MIT. He served in the Energy practice of World Bank for 7 years, working on projects across 9 countries before joining NITI Aayog to establish the Atal Innovation Mission.