As trekking becomes the go-to activity to escape the cacophony of the city, we look at some of the reasons that are helping preserve the pristine vistas capturing our attention since time immemorial.

As I trudge through the winding yet concrete layered track leading up to Kanamo peak in the Spiti Valley, Himachal Pradesh, I can’t help but recall my journey across the same area five years ago when it was a barren landscape. Today, however, the scene is different. I spot solar street lights, concrete schools with happy students and a robust social structure, something that was almost non-existent just a decade ago.

Trekkable is one word that can be associated with Kanamo Peak, with which comes easy accessibility. The numerous trails that lead through the villages of Kibber and Chicham en route are frequented by both the seasoned and the greenhorns, the latter usually looking to earn a feather or two, as they trek along such high altitudes. More often than not, large footprints lead to adverse effects on the area concerned, but the scenario I behold in front of me is quite positive. I notice clearly demarcated trails, warming posts and a stable social infrastructure for tourists and locals to name a few. With cities teeming with activity, and accessibility becoming a defining factor for seasonal retreats, the thin line between avid travellers and adventure enthusiasts has become blurry. Over the years, the preferences of travellers have also changed. Now, more than ever, they prefer to transcend the confines of convenience and experience nature at its unadulterated best, resulting in the widespread interest of trekking to the hinterlands. But this gradual change came with a price. As people opted away from the frequently-travelled paths and gravitated towards lands hitherto unexplored, ecosystems across the country came under the strain of coping with waste that was left behind as large groups started following trekking trails.

Over the last decade, traffic on several trails – be it the remote passes of the greater Himalayas, the preserved forts along the western Ghats or the lush green hillocks of the north-eastern frontiers – has grown exponentially. With the increased footfall and multiple trekoperators, the damages inflicted on some of the most sensitive ecosystems began to create a gaping hole. In the current era, it is imperative that we take over the charge of preserving the beauty and sanctity of the ecologically-endowed zones at the heart of the Himalayan outback, and very few responsible agencies have emerged and accepted the responsibility of finding a solution to the problem of waste management in these areas. Over the years, these organisations have worked tirelessly to become catalysts for practical and community led Solid Waste Management (SWM) initiatives in rural, urban, and protected areas.

Over the last three years, almost 50 percent of the waste collected has

been diverted away from landfills through recycling and upcycling

There was a general sense of apathy and lack of awareness which made a lot of behavioral changes the need of the hour. And any plan in that direction, needed to work with and have the support of all the stakeholders in order to be successful – trekkers, trekking or tourism organisations, the villages, NGOs and the government. The vision to leave our pristine mountains in a better shape was formalised in the shape of an initiative called Green Trails by Indiahikes. The idea was to integrate responsibility in every aspect of travelling to the eco-zones that had beauty aplenty but lacked a proper method or infrastructure to tackle the ever increasing waste generation. 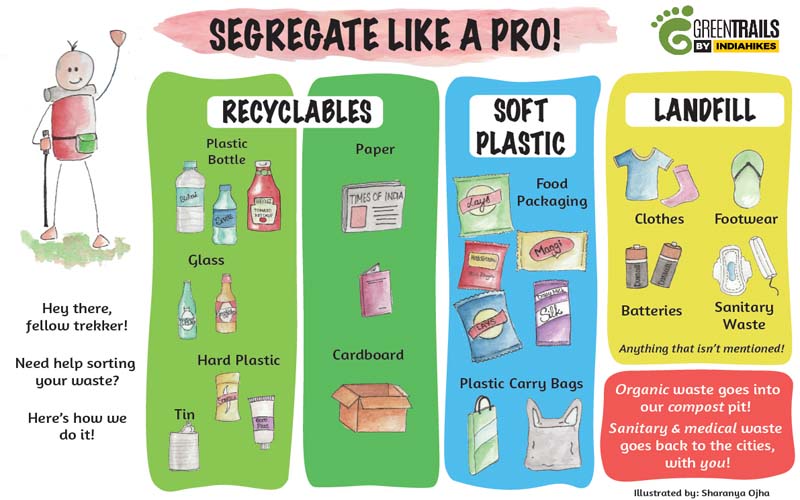 Since its inception, several initiatives from an NGO called Waste Warriors have also evolved manifold. Beginning with innovative solutions for organic and solid waste, these programmes have grown to include the concept of clearing entire areas by setting in place, weekly cleanliness drives, dust bins and several waste collection points that simplify the problem of waste segregation. Take for example the massive strides they have taken towards achieving a zero-waste policy at the famous Bhagsu waterfalls in Dharamsala. Another ground-breaking step incorporated by Indiahikes was diverting waste away from landfills that lead to chronic poisoning of resources both over the ground and under. Over the last three years, almost 50 per cent of the waste collected has been diverted away from landfills through recycling and upcycling (Upcycling or creative reuse is a process of utilising unwanted by products and waste to create articles or new products of better quality. For example, plastic bottles are tightly stuffed with waste wrappers and by products to create solid and sturdy ‘bottle bricks’ that can be used for construction). “We started identifying the waste we generated as an organisation and worked on ways to reduce it. We moved to redesigning our menu and also did away with packaged goods . On treks, we collaborated with dhabas and educated them on segregating waste and composting their organic waste at the source. We helped them bring down their waste on a regular basis. Many of them changed their menu to introduce local produce over processed foods,” says Lakshmi, who heads the Green Trails initiative at Indiahikes.

Members of the initiative are innovating in all spheres. From designing eco-toilets that operate in sub-zero temperatures to energy management and conservation. They are also working towards bringing down the carbon footprint of recyclable and non-recyclable waste from the mountains through eco-bags that have become a must on every group led by Indiahikes. And the results are visible.On the trails leading to Sandakhpu (one of the oldest and most popular trek route in West Bengal) and Lohajung (the base camp for the trek leading to Roopkund lake), these simple methods of segregation and upcycling have led to what can only be termed as ‘massive eco-restoration’.Since its inception, the tally stands well over 54,000 kgs of waste that has been collected. The use of plastic bags has reduced significantly. The dry composting toilets ensure that human waste does not pollute the water sources and also become rich manure for the soil by the end of six months. The policies to not wash anywhere near water streams have helped reduce the influx of washing effluents reaching the main water streams.

As Green Trails received attention, the founding members at Indiahikes realised the need for creating a shift in perspective and thinking. Identifying the immense benefits of being outdoors and managing it in a way that caused least impact to nature was of utmost importance. Green Trails has managed to normalise basic sustainable practices in most trekking routes in the Himalayas. The traditional means that employ rules and stringent regulations has given way to collaboration and self regulation. Dialogues that discuss greater protection to sensitive eco-zones have been initiated and many areas across the country are moving towards special norms ensuring sustained and positive growth for designated areas. Going forward, organisations are moving towards devising ways through which waste can be efficiently handled at the source. Upcycling seems a logical choice – simple, effective and easily scalable. Indiahikes has roped in women from the local villages to craft upcycled products – ensuring them financial stability in the process – and now portrays the problem of waste as one that can be easily solved. 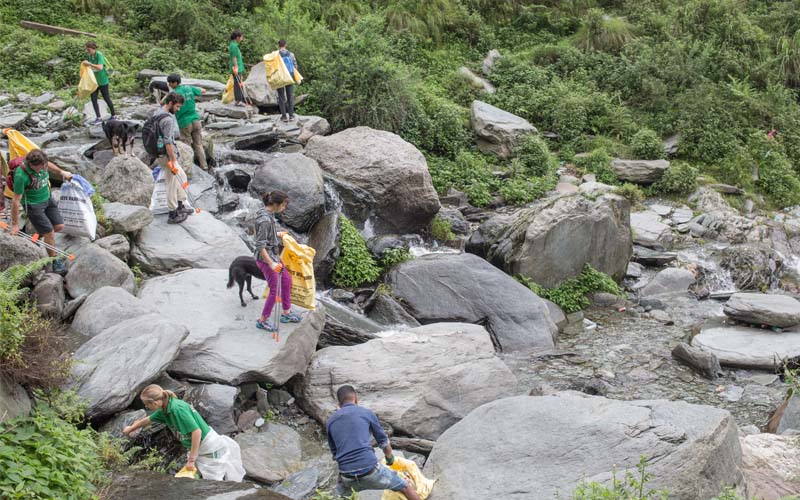