The game is on

The game is on


From board games that sharpen the brain’s strategic prowess, to those which build memory, Indian traditional games are not just for enjoyment. Abhishek Dubey looks at some of these games which are making a comeback in contemporary avatars, captivating the attention of even the modern day gamers

Ancient Indian epics are rife with descriptions of entertaining games that kept people of that time entertained through fictional yet strategic challenges. Be it indoor or outdoor games, there are several examples of hours spent by the elite and the masses alike indulging in sporty challenges. Take for example the game of chausar, often called the ancestor of the immensely popular board game we now call Ludo. Played by four players on a cross-shaped board, the game involves the strategic movement of markers – four of which are allotted to every player. This is the game that finds a mention even in the Indian epic, Mahabharata. The modern avatar, Ludo, is now one of the most popularly enjoyed game on online platforms with thousands of games being hosted online. Historians say similar dice games were popular across India during ancient times. Remnants of oblong dices have been excavated at several Harrapan-era sites. The dice is mentioned in the Rig Veda and Atharva Veda too.

Another popular game, chess, is believed to have been invented in India. Experts say it was originally known as ashtapada (64 squares) and the game used to be played with a dice on a checkered board, but without black and white squares. Some say chaturanga (quadripartite) was the original chess game. In Sanskrit, chatur means four and anga means limbs, that were symbolic of the four branches of an army. Just like an army from the ancient times, the game used pieces shaped like elephants, chariots, horses and soldiers, and was mostly played  to sharpen war strategies. The game spread to the Persian kingdom in the 600 CE as Shatranj. Another similar game was chauka bara, which was played with cowries shells and coins to strategise for wars and also to help children learn counting of numbers. While it was originally played on squares stitched on silk fabric, a simpler version of the game is played in Southern India with chalk lines drawn on the floor. A similar traditional board game that is played even today is kattam vilayattu. A variation of tic-tac-toe, the game used to be played with shells, coins or even stones!
Card games too were popular in India during the medieval era. An example is ganjifa, which was immensely popular in Mughal courts. Mentioned in historical records beginning around 1300 AD, these hand-painted cards are precursors to today’s playing cards. The circular or square ganjifa cards, intricately painted in vibrant colours and motifs inspired by nature, mythology or life, were played in groups. While the game may have been lost to time, the art of ganjifa making is still alive in pockets of the country. These games were mostly developed to sharpen the brain or skills. A few local games of Tamil Nadu are, in fact, aimed towards strengthening memory and observation skills – pallankulli attam and aadu puli attam (also known as huli gatta in Karnataka and puli joodam in Andhra Pradesh) being two of them. The first, which requires two columns of boards with seven shallow cups and objects to resemble coins (pebbles, seeds or shells), is played by two or four players, while the second, boasts a rather interesting set of rules involving coins representing goats and tigers! Interestingly, many of these ancient indoor games are being reborn on online gaming platforms. 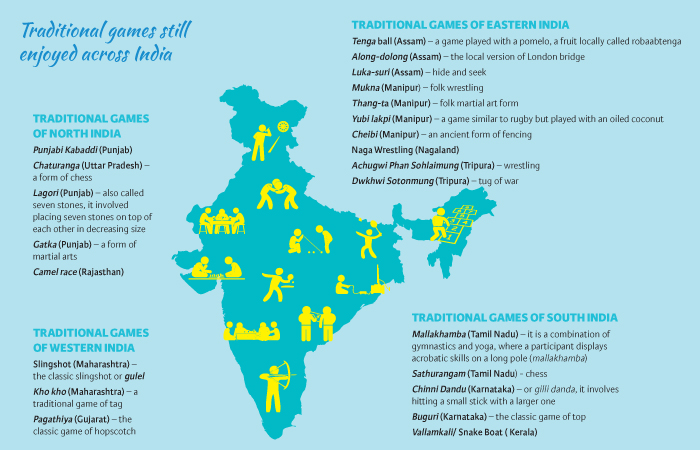 India is also the birthplace of several outdoor games, that are known across the world by different names. What the rest of the world calls catch-and-throw, the residents of Assam’s Karbi Anglong district call dhup-khel. But the key element that sets the two apart is the object being thrown and caught – a fabric ball. It is one of the more popular games among local women. Lore says originally, women used to wrap cloth around a vegetable and use it as a ball! It has often been seen that traditional games used ingredients found locally. An apt example is the game of gilli-danda, which is popular across rural India even today. Played with two pieces of sticks and a stone or a rounded object, it can be played between two or more players. History says this game was popular in the region around 2000 years ago.

The beauty of these sports is that, while such modern games as football and boxing exist, traditional ones are still intrinsic to everyday life across the country. Take for example Mizoram’s insuknawr, a sport where participants try to push each other out by holding a bamboo or a wooden staff. Such is the importance of this indigenous game that its representation can be found on the emblem of the state sports council. In Northern India we see such traditional games as kushti (pehelwani or wrestling), which is also popularly and extensively practised in South India as gushti; surr (an outdoor game of tag played in the areas around Ayodhya in northern India) and sqay (a form of martial art originating in Kashmir). There are examples of such traditional games from every region of the country. Today, as we look to the past to find solutions for our present, these traditional games and their relevance become very important. Government and private organisations are taking steps to preserve these games. While board games are being reborn in digital formats, schools have been asked to train children in ancient outdoor games like silambam, mallakhamb, and gatka.

Abhishek Dubey is India’s foremost sports journalist, who has covered international sports for over 15 years now. He is the author of three critically acclaimed books and is currently, National Advisor, at Prasar Bharati Sports, India’s state broadcaster.