It is always heartening to see the intended implementation of government initiatives in India. However, the success of the Swachh Bharat Mission, launched by Prime Minister Narendra Modi in 2014 has become the new benchmark. In just five years, it has been recognised as the world’s largest sanitation drive, says Parameswaran Iyer

In his maiden address to the nation on August 12, 2014, Prime Minister Narendra Modi expressed his concerns about the issue of open defecation in India, becoming the first PM of the country to do so, on a national platform. In his address, he resolved to eliminate the widely-prevalent practice in just five years. To achieve the goal, he launched the ambitious Swachh Bharat Mission (SBM) on October 2, 2014. Prime Minister Modi has stayed true to his words and in five years, more than 55 crore people in rural India have shunned the practice of open defecation, and as many as six lakh villages in the country have declared themselves Open Defecation Free (ODF). The unexpected success that this initiative has achieved in the country, especially in the rural pockets, is being lauded the world over and for good reason. It is a mass movement that involved over 1 billion people, who altered an age-old habit that once seemed impossible to curb. It is being recognised as the world’s largest sanitation drive. The journey has been demarcated by six important guiding principles that can be applied to any large transformation scheme – the ABCEDF policy of implementation.

People at various hierarchies may have competing priorities. After PM Modi announced the mission, the Department of Drinking Water and Sanitation (DDWS) had to ensure a goal that was congruent across the administrative ecosystem. Team SBM-G (Grameen/Rural) visited each state multiple times and engaged directly with district collectors through learning workshops, informal gatherings and WhatsApp groups, ensuring that sanitation stays on top of everyone’s agenda. The three layers of the PM-CM-DM (Prime Minister-Chief Minister-District Magistrate) model worked in cohesion like never before.

When faced with a difficult situation, teams who do not believe that a set goal can be achieved, are often unable to find motivation. As a result of which, they do not try hard enough. To ensure optimum productivity, the SBM created teams at the centre and in respective states that comprised a unique blend of young professionals with lesser administrative baggage and a fresh perspective, as well as experienced but driven bureaucrats, who believed that the goal is truly achievable and focussed on finding creative solutions. 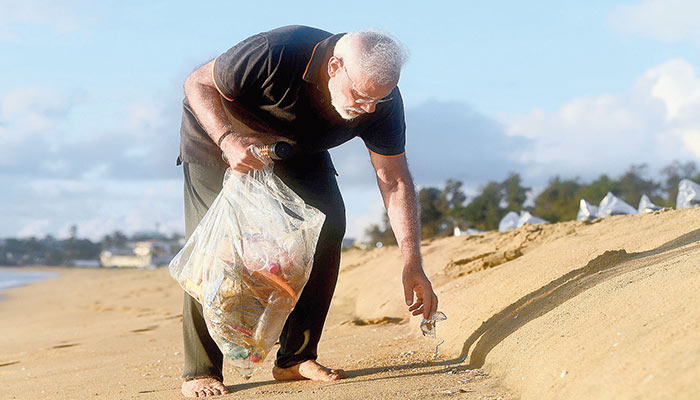 At its core, the SBM is a programme that results in behaviour change. Communication at all levels –  above and below the poverty line, and mass and inter-personal – was fundamental to SBM. Nearly 6,50,000  grassroot sanitation champions called swachhagrahis were trained, who went from door to door to communicate and deliver the message of swachhata or sanitation. Following that, the SBM attempted to make sanitation glamorous by extensively engaging with the media, leveraging popular culture and associating Bollywood celebrities, sportspersons and other influencers to promote the cause. Mainstream movies such as Toilet: Ek Prem Katha and Padman have also managed to capture the attention of the masses and create awareness towards the benefits of an ODF state. And the mission kept the buzz alive through regular large-scale events with the Prime Minister at important milestones, ensuring sanitation stays on top of public recall.

Over the years, the SBM has become a jan andolan (mass revolution), a fact that the Prime Minister has reiterated on many occasions. Everyone became a stakeholder and sanitation became everyone’s business. People constructed their own toilets and motivated others; communities planned activities and monitored progress, and villages declared themselves open defecation free. Even corporates, NGOs, civil society organisations, and other government ministries and departments played a role in mainstreaming the cause. 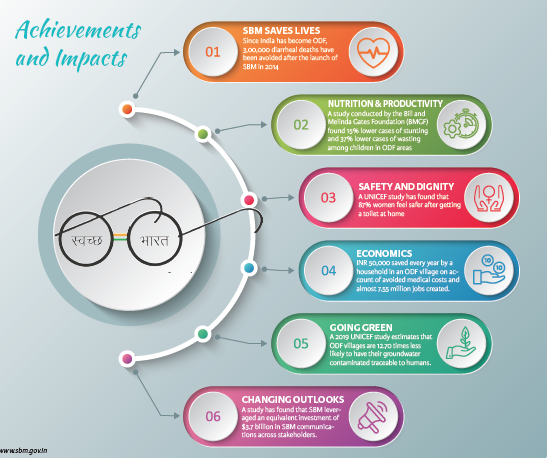 As progress started surpassing expectations, many questioned the veracity of SBM’s progress figures. Therefore, it became even more important to encourage third party monitoring to reinforce the credibility and keep the volunteers motivated. Such organisations as the World Bank, UNICEF, BMGF and WHO conducted various assessments of sanitation coverage and usage, successes and areas of improvement, as well as the health, economic and social impacts of the SBM. India became the global laboratory of sanitation. 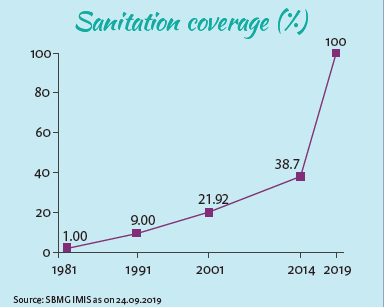 When all states declared themselves ODF by October 2, 2019, the Prime Minister mentioned that it was just a milestone and not the finish line. There still exists a strong focus on ensuring that the ODF behaviours are sustained and that no one is left behind. DDWS recently released the forward-looking 10-year sanitation strategy, articulating the goal of moving from ODF to ODF Plus, the broader goal of overall cleanliness in India’s villages. Some of the important factors to become ODF Plus include ODF-Sustainability, Solid Waste Management (biodegradable and plastic) and Liquid Waste Management (village water and fecal sludge management). The Indian government is continuing its quest to deliver basic services to its citizens. In his first Independence Day speech of his second term, the Prime Minister announced an even more ambitious goal – of providing piped water supply to all households by 2024. Aligning with this goal, the Jal Jeevan Mission is being designed to deliver, based on the policy of implementation. Hopefully, that target to will be met successfully!

Parameswaran Iyer is the Secretary, Ministry of Drinking Water and Sanitation and is leading its flagship Swachh Bharat Mission. A 1981 batch IAS officer, he joined the World Bank in 2009 and has previously worked in Vietnam, China, Egypt and Lebanon

The much needed check-in