With Lahaul valley’s vibrant flora on one side, Pin valley’s diverse fauna on the other, Kullu Valley to the west and Kinnaur to the south, Spiti’s cold desert is the perfect destination to embark on a journey of self-discovery

Nature has been harshly benevolent to Spiti – a small valley in Himachal Pradesh – that is a stark yet surreal paradise, divided by the jagged peaks of snow-capped Himalayas and united by steep mountain passes. With this in mind, I embarked on a journey to Spiti Valley from New Delhi.

Since I was backpacking alone, I decided to visit some of the lesser known destinations along the way and not let my experiences be defined by those who had walked these roads before me. The first leg of my 20 to 36-hour journey took me to Chandigarh from New Delhi. My first stop after that was the transit town of Reckong Peo, or simply Peo. The bus terminal was a simple structure, with a smiling HRTC (Himachal Road Transport Corporation) official manning the ticket counter. With a Bollywood-themed horn that blared at every sharp corner, the bus climbed on towards Spiti valley, passing through a picturesque landscape. As the road became steeper, outside the window, green turned brown, looming peaks came closer and the air became rarer. The beautiful forested hills were replaced by barren mountains so steep that the distinction one associates between the sky and the earth was all but blurred. Tiny specks of white and sometimes gold, appeared from time to time on the slopes, only to manifest themselves into Buddhist monasteries, as we neared. A fellow traveller, a young monk, volunteered as my travel guide, pointing out the unique philosophy of Tibetan architecture! He explained that each house and monastery painted an image of a deity and resembled a face (with the square windows as eyes and the doors offering a warm, protective embrace of shelter). Although, I was journeying into, what many describe as one of the hardest inhabitable terrains, I realised my confidence had been boosted by the warmth of the locals. From children in school uniforms to monks in magenta robes, everyone was welcoming and offered guidance. After a six-hour bus journey, I decided to halt for the night at a small village called Nako. A cluster of traditional Tibetan mud houses built around a lake overlooking the eponymous monastery, Nako was a delight. Although Nako offers every comfort a traveller needs, it has an air of timelessness about it. In Nako, I made the first friends in the valley, friends who stay in touch even today!

Early next morning I started for Kaza, the administrative centre of Spiti, to experience life as it is in the valley, I decided to squeeze myself into a local supply truck that would stop at every village on its way to Kaza. On my way, I made pitstops at Chango and Sumdo, where our entourage stopped for some snacks and exchanged anecdotes with personnel from the CAPF battalions posted there. As the truck halted at monasteries, monks came over to collect supplies and struck up warm conversations with me, which gave an insight into their simple lives. The 1,000-year-old monastery in Tabo was a sight to behold. Unlike the imposing monasteries elsewhere, the Tabo Gompa offers a humble perspective into Buddhism with it’s low-rise temples. The main prayer and assembly halls at the monastery are devoid of any artificial light and the sun-lit interiors add to the to the mystique of the simple construction dating back to AD 996.

I arrived at Kaza at 8 PM and headed to Moustache hostel, which was my home for the next week. There, I met Rohit, the smiling proprietor from Lahaul. Consistent with the local sentiment, he offered me a special tea made from seabuckthorn, a berry indigenous to the region, that was a welcome relief. As I sat down to a hot dinner, I realised that this journey through one of the highest cold deserts in the world while battling a fickle climate may be extremely challenging, but the joys were unparalled — of sipping warm tea while being wrapped in a cosy blanket at 3,800 m above sea level, laughing aloud with a group of people who I had not known a week ago, but who had accepted me for who I was and had opened up their hearts and homes to me. The next day, I opened my eyes to a bright morning with the massive peaks of Spiti valley staring down upon me. There was an air of activity throughout the hostel as everyone wanted to head out and visit the maximum number of tourists spots to make the most of the near perfect weather. I settled on a different approach, with a steaming cup of Seabuckthorn tea in hand, I headed to the terrace where I enjoyed a light breakfast and was later joined by Rohit, the proprietor with whom I now share a strong bond of friendship. He interrupted my explanation for some quiet time and suggested that I visit the Pin Valley national park, some 70km away and graciously offered me his ‘72 Enfield for the day.

Kicking the 50-year-old beast to life, I eased into gear and started on what was to be my life’s most beautiful ride. Pin Valley, with its majestic peaks that unlike Spiti’s were covered with multi-coloured flowers, came as a pleasant surprise. The motarable road ran on till the village of Mudh where I parked the bike and proceeded onward towards the Pin-Bhaba pass on foot to test my fitness.

Although, the rarefied air at 4000m had me gasping for breath in less than an hour, I did chance upon the majestic Himalayan Ibex, a rare breed of horned alpine goats indigenous to the region. Alas, all I could do was click a picture as it stared curiously at me before galloping up the steep slopes of the surrounding mountains.On my way back, I crossed Kaza and proceeded onward to the village of Hikkim. Situated around 25km from Kaza, Hikkim is home to the highest post-office in the world at 15,000ft.

As someone who has always been a fan of sending and receiving letters, this trip was nothing short of a pilgrimage. It might not seem much, the tiny post office, but this was Hikkim’s connection to the world, it was here that the people received their passports and children their admission cards for various examinations. A ‘runner’ would take the day’s post in an hour to Kaza from where it would then be shipped off to Peo and onward to its destination via Shimla.

As I started down the steep, winding road to Kaza, it was already dusk and the same peaks that had proudly looked down upon the valley now seemed slightly exhausted of resolutely guarding this beautiful valley from all sides. It was here, on this narrow albeit well-maintained road, with the arid mountain-scape illuminated by the bright pink rays of the setting sun, that I realised the importance of these short distances, the many ‘short’ one hour walks that enable the people and the culture to stay connected (however remotely) and live on.

The following day, I opted to hire a scooter for exploring Spiti. My first stop was Ki Gompa, one of the largest monasteries in Spiti valley and as I stepped into the prayer hall, the cosy interiors coupled with the rythmic chants immediately calmed me. The monks at Ki opened an ancient meditation room for me. Illuminated only with the sunlight from small windows, these meditation rooms make for the perfect setting to explore one’s soul.

When I had started this trip, I had wondered if I would have a good story to tell, but sitting at Rohit’s ancient albeit massive dining table that night, I realised all I needed for a story was to look up and there it was; a lifetime of travel-tales!

Spiti Valley is accesible through Reckong Peo all year round via NH 44 and NH 5 that connect the international border with China.
State transport busses run once daily from Chandigarh to Reckong Peo and from Peo to Kaza.

Kaza is also accessible through the Rohtang Pass via Manali. Although state transport busses do not run on this route, it is fairly popular among adventure and off-roading enthusiasts. Rohtang Pass is open  from June till October, as there is a chance of the roads being snowed in throughout winter. On this route, you will also have to cross the mighty Kunzum Pass at
4,551 m that serves as a connection between the twin valleys of Lahaul and Spiti.

Situated amongst soaring peaks, the Pin Valley National Park is home to wide variety of flora and fauna and offers a welcome relief from the arid landscapes of Spiti. A motorable road runs till the village of Mudh, at the periphery of the park.

Ki Gompa as it is locally called, is the largest monastery in Spiti and is built around a conical hillock. Due to the unique construction, the entire settlement appears to be more like a reinforced fort. The Gompa is home to almost 350 monks and students. 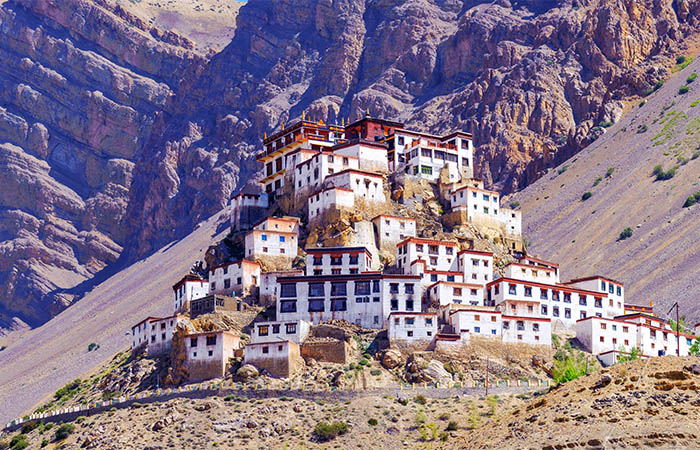 Situated at 4,270 m, this glacial lake lies on the road from Manali to Kaza and offers spectacular views of the surrounding peaks along with mirror-perfect reflections in the crystal clear water. Camp for the night in the open for a mesmeric experience under a star-lit sky. There is also a 10-12km hike that takes you to the lake. 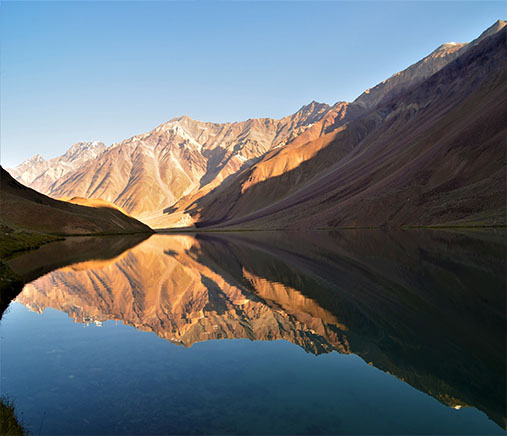