Monsoon provides not just relief from the scorching heat but also breathes life into nature and all her elements. As India welcomes the first showers of the year, we take a trip to some of the most stunning waterfalls across the country

One of India’s most mesmeric waterfalls is the astounding Dudhsagar Falls. Located in the Sanguem taluka of Goa, this stunning cascade of the Mandovi river plunges 1,017 ft (309.9 m) creating a magical sight. Dropping from such an incredible height, the water of the fall creates an illusion of white spray and foam almost like milk, which has earned it the name Dudhsagar (dudh or doodh in Hindi means milk).Falling in the jurisdiction of the Goa Forest Department, this waterfall is a part of the Bhagwan Mahavir Wildlife Sanctuary. The roads to the falls are maintained by the forest department, who charge fees for entry and cameras. The fall can be reached either by foot or by rail. There is also an off-road track that is suitable only for off-road vehicles, but even then visitors have to trek about a kilometre to reach the base of the falls. 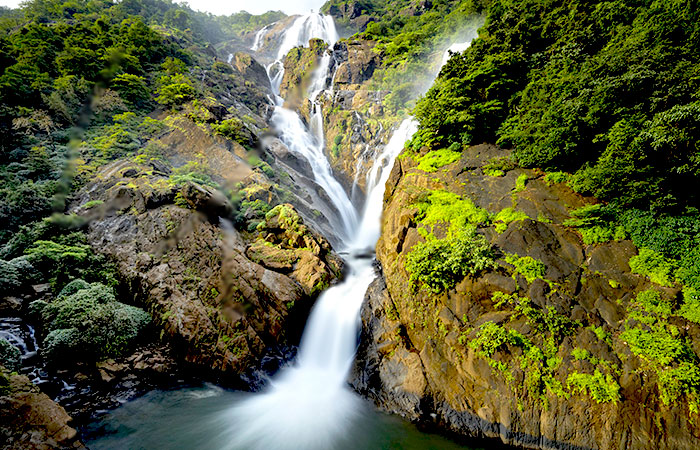 The pride and joy of the state’s Jabalpur district, the Dhuadhar Falls is so called because the 98.4 ft (30 m) cascade creates a smoky appearance (dhuan in Hindi means smoke and dhar means flow). Located in the district’s Bhedaghat town, this waterfall originates from River Narmada and its roar can be heard from a great distance. Although it is a year-round destination, it is best visited during the Narmada Mahotsava festival (around September-October). The area surrounding the fall is ideal for picnics and there are provisions for boating too. The waterfall can be accessed from both the eastern and western bank of the Narmada river. 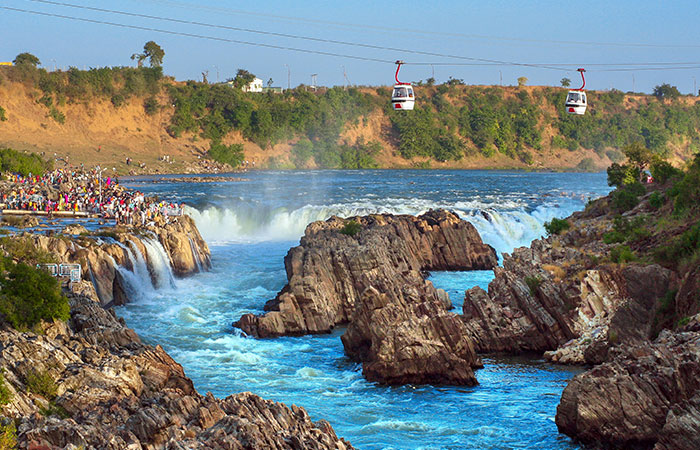 Situated in Gujarat’s Dang district, the Gira Waterfalls is seasonal, i.e, it comes to life after the onset of the rains. One of the most picturesque sites of the district, this waterfall drops into the Ambica river from a height of 98.4 ft (30 m). The vicinity around the falls is ideal for picnics and there are several small shops that offer delicious snacks. Located about three km away from the town of Waghai, it can be accessed by roads. 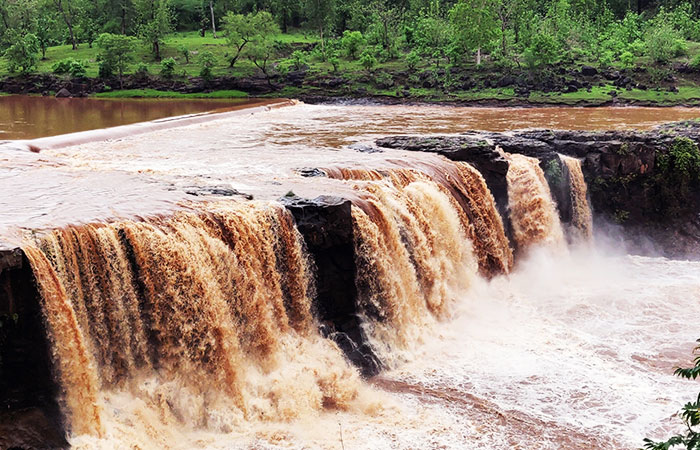 A major attraction of the Shimoga district of Karnataka, the Jog Falls plunges 830 feet (253 m) into a chasm, making it one of the highest waterfalls in India. Also known as Gerusoppe Falls, Gersoppa Falls and Jogada Gundi, this stunning waterfall originates from River Sharavathi and is surrounded by dense evergreen forests. Rainbows are a pretty common sight around the waterfall during monsoon. There are two viewing decks for visitors – one near the main entrance and parking area, and the other near the inspection bungalow. Thrill-seekers can also hike down 1,400 steps to the base of waterfalls and soak in the surrounding natural beauty.  According to news reports in October 2020, the Jog Management Authority (JMA) is setting up a zipline along the waterfalls, as a part of the Jog Falls Comprehensive Management Plan. The zipline is expected to be Karnataka’s longest and the country’s second-longest. 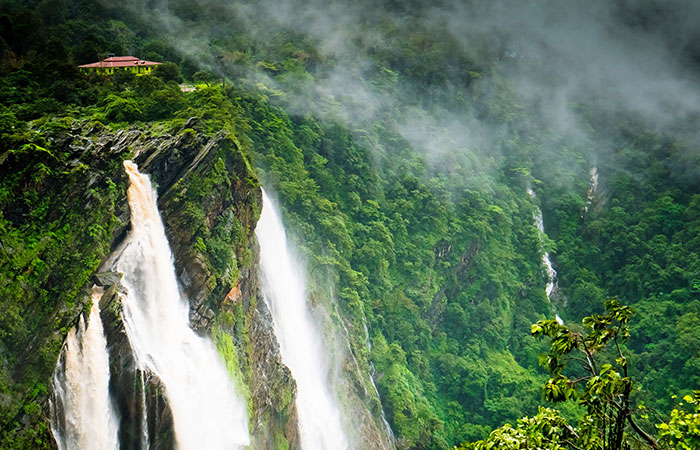 Soochipara Waterfalls, which is also known as Sentinel Rock, is termed as a natural masterpiece of the state’s Wayanad district. This 650-ft-high (198.12 m) waterfall is surrounded by dense forests, enhancing the viewing experience. The name of the waterfall in Malayalam means needle-like rocks, indicating the pointed-shaped rocks at the base of the fall. The cascading water has created a natural pool where visitors can take a dip or splash in its cool waters. To reach the summit of the falls, visitors have to drive across moderately difficult terrains and walk a rocky pathway. 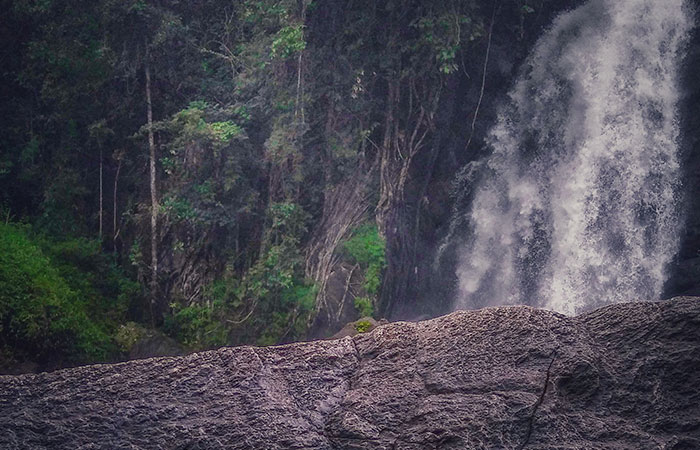 Also known as Bhewma Falls, and colloquially as Amitabh Bachchan Fall (in reference to its height, which is about 900 ft or 275 m), it is one of the highest and most spectacular of its kind in Sikkim. This fall is located halfway on the road connecting Chungthang to Yumthang valley in north Sikkim and can be best viewed from a quaint wooden bridge in front of it. 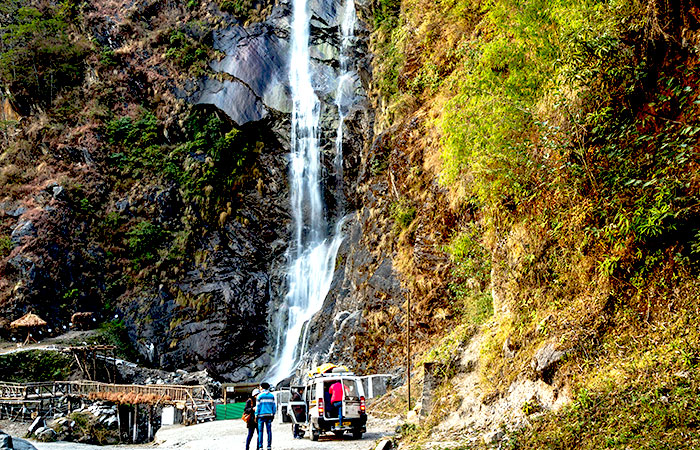 A cascade of River Indravati in the Bastar district of the state, the Chitrakote Waterfall is one of the most magical falls in India, literally. During rainy days, the water of the fall appears reddish while on moonlit summer nights it appears sparkling white. Spanning 300 m in width, it is touted as the broadest of its kind in India. It plunges 90 ft (27.3 m) and is also called the Niagara of India because of its shape, which is similar to a horseshoe just like the famous Niagara Falls of the US. The area around the falls is a popular picnic spot. Surrounded by dense forests, this waterfall attracts nature lovers and photographers alike. Although this fall is at its roaring best during monsoon, it charms visitors all year round. 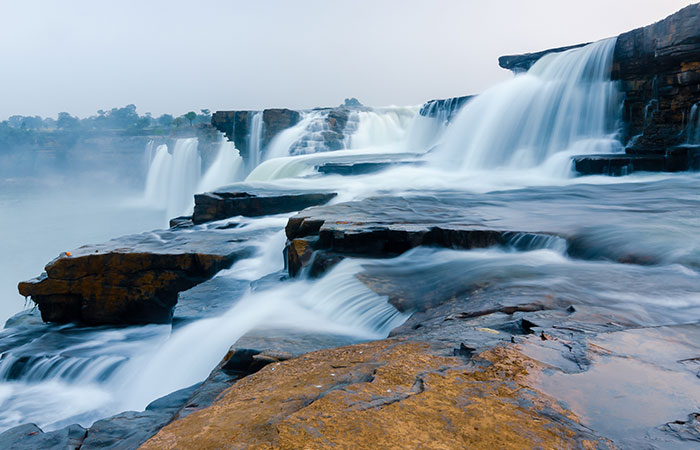 Although the high-altitude town of Sohra (previously known as Cherrapunjee) is counted as one of the wettest places in India, it is also home to one of the most breathtaking cascades in the country – Noh Sngi Thiang. This waterfall, which drops from a height of over 983 ft (300 m), appears like a jewel draped over limestone cliffs in the evergreen forest of Khasi hills. It is segmented into seven parts, which is why it is also known as the Seven Sisters Falls. Often claimed as the third-highest of its kind in India, this waterfall is a haven for photographers who spend hours capturing the myriad hues the sunlight creates on the cascade. Sunset at the waterfall is often termed as a spectacular sight. It is, however, during the monsoon that the waterfall is most gorgeous with all its curtains filled out. The best vantage points of the waterfall are the nearby Mawsmai village and the Sohra Eco Park located close by. The park, along with views of the fall, also offers beautiful vistas of Sohra’s verdant canyons and lush slopes. 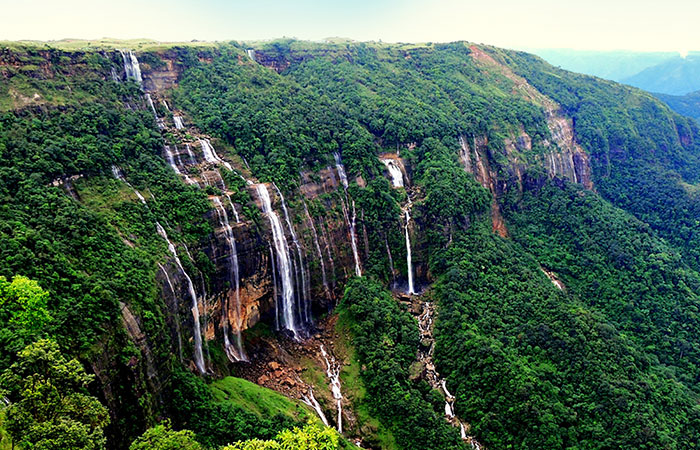 Dropping from a height of 270 ft (82.2 m), the Talakona Falls is the tallest of its kind in the state. It derives its name from the Telugu words ‘tala’ meaning head and ‘kona’ meaning hill. The waterfall originates from the Seshachalam Hills and is a much-frequented site for photography and family picnics. Set in a fairytale-like surrounding within the Sri Venkateswara National Park in Chittoor, this waterfall can be reached via a well-maintained pathway that is lined with greenery. Locals believe that the water of this fall has healing properties. There is a checkpoint a few kilometres before the waterfall, where entry fees are collected. 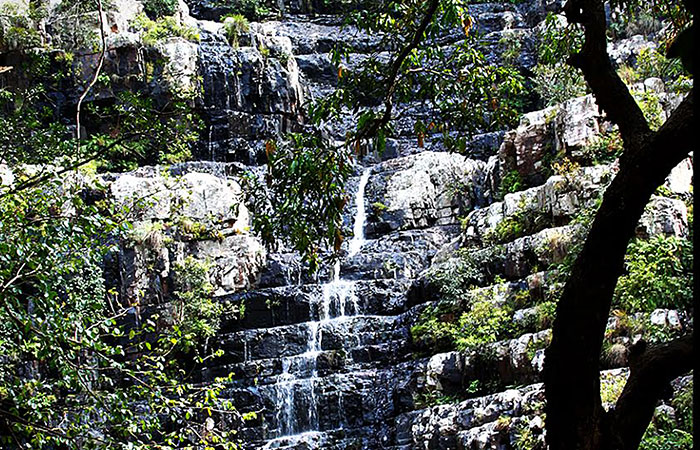 A treat for the eyes, the Hogenakkal Falls is a breathtaking amalgamation of rocks, water, mist and natural beauty. It is located on the Karnataka-Tamil Nadu border and originates from the Kaveri (Cauvery) river. The name of this waterfall in Kannada means ‘smoky rocks’ as the force with which the water hits the base creates a misty sight resembling smoke emanating from the rocks. Although this waterfall mesmerises visitors throughout the year, it is the most picturesque post monsoon. Adventurous rides on country made dinghies called parisal or coracle is a must-have experience here. 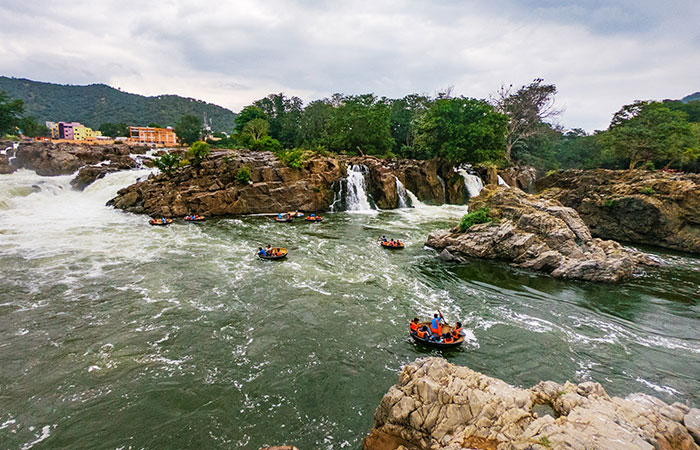 A graduate of the Indian Institute of Mass Communication, Shrabasti Anindita Mallik has worked with MyCityLinks, a Bhubaneshwar-based tabloid, and New Delhi-based The Pioneer newspaper. She actively writes on travel, Indian culture and traditions, music and any subject that intrigues her.