A set of new-age organisations have for the first time, created a new environment of doing smart business in India by focusing on providing innovative solutions to the country’s problems, say start-up mentors TN Hari and MS Subramanian

Imagine a scenario where a farmer in a remote Indian village is able to check the soil quality of his field and receive location-specific weather forecast before sowing of seeds, or keep track of his livestock remotely, using a mobile phone. Interestingly, with the advent of advanced mobile technology in the country and the spurt of innovative agritech startups, this is no longer an imaginary situation. And agriculture is not the only sector in which tech-based start-ups in India are solving micro-level problems. This is a phenomenon being observed across genres. However, until very recently, many first generation Indian entrepreneurs shied away from solving local problems or working on cutting edge technologies. One can attribute this partly to the lack of bold venture funding, as a result of which businesses had to be built around solving problems that could quickly generate positive cash flows. Many of these businesses leveraged the wage arbitrage between India and the West to build companies that provided outsourced services. Solutions to local problems needed change in consumer behaviours and low price points. Invariably they involved longer gestation periods and initial cash burn. This called for investors with deep pockets, nerve and even audacity. Given the relatively small size of market opportunities in India, such investors had stayed away.

However, BRICS, an acronym coined in 2006 (South Africa added in 2010) to reflect the power of Brazil, Russia, India, China and South Africa – an association of five major emerging national economies that would reshape the world economy – triggered a shift in economic activity and power from the developed world to the emerging economies. This changed the world view on the size and potential of the Indian consumer power. A shift that presented enormous opportunities for capital – opportunities on a scale that had shaped the destinies of Europe, after the industrial revolution, or USA, after World War II. This shift exposed the macroeconomic potential of India to the world and investing in India’s growth story became the new investment thesis of venture capital and hedge funding companies, fuelling startups, which, using technology started focussing on solving local problems. In a manner of speaking, the new world order had arrived! Over the last few years, the current Union government, helmed by Prime Minister Narendra Modi, through a combination of pragmatic policy making and execution focus, has accelerated this process tremendously. 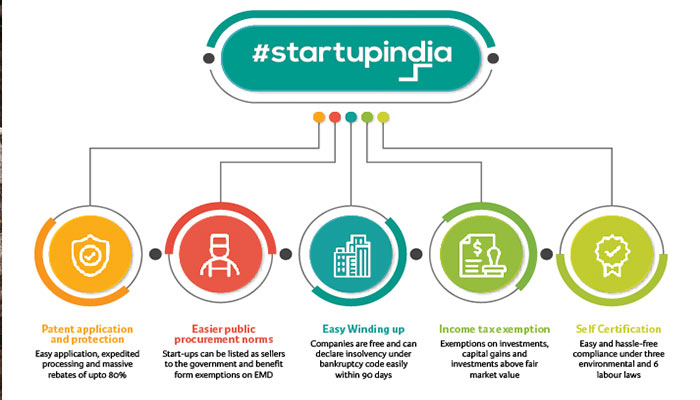 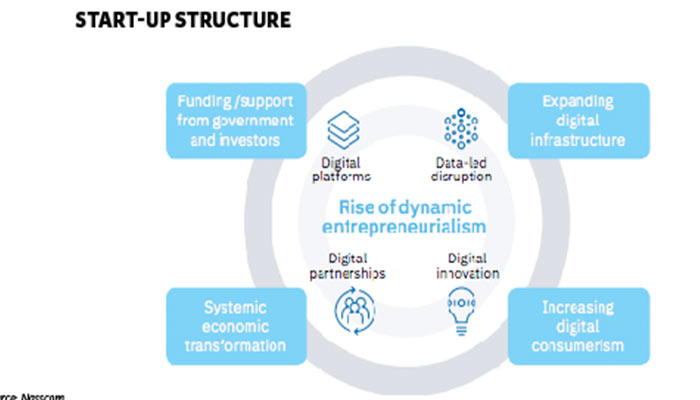 Solutions provided by programmes of the Union government like Start-up India and Digital India support the new-age entrepreneurs to innovate more smartly and effectively. An apt case in point is India Stack that has become the underlying platform for the growth of Digital India. An ever expanding set of APIs, it provides a technical and collaborative infrastructure upon which technology companies and the government can grow and innovate. It has not only made the process of digital innovations easier but has solved the basic issue of cost. India Stack is significantly lowering innovation costs, which makes it easier for businesses to build digital solutions. It is also demonstrating how a loose network of professionals in the country are replicating what Opens Source triggered 20 years ago in Palo Alto (an American multinational cybersecurity company) achieved. Other such successful solutions are India’s payments infrastructure and a unique digital identity, which is now the envy of the world. With focus on financial inclusion, that is, bringing those without bank accounts into the formal banking system, India’s payments infrastructure UPI or the Unified Payments Interface, has been a huge success. The bane of this is Aadhaar, the unique digital identity of each Indian. Launched about a decade ago, this unique 12-digit number system today includes about 1.2 billion Indians. This is linked with UPI, which enables easy and instant transfer of funds. It has been hailed as one of the most efficient payment systems in the world and is extremely affordable.

Creative use of technology can address many basic problems as well as plug leakages and inefficiencies in existing systems, as Aadhaar has amply demonstrated. Innovation in the use of technology can either come from profit-seeking entrepreneurs or from a visionary government that develops innovative and freely available public goods that can be used to increase efficiencies or minimise leakages  and friction. New-age entrepreneurs have created a whole ecosystem of micro-entrepreneurship. That entrepreneurship has the potential to change the employment paradigm and landscape in the country if managed well. An example is the startup Bigbasket, one of India’s largest online food and grocery stores. It is not just offering services to urban customers, it is also working closely with nearly 10,000 farmers and educating them on scientific farming practices and, in the process, bettering their livelihoods.

Similarly, many other indigenous technology platforms like Ola (a ride sharing company), Swiggy (online food ordering and delivery platform) and Urbanclap (offering home and lifestyle services) have not only fulfilled urban needs but also helped create a level playing field for smaller entrepreneurs, create jobs and generate incomes. In the genre of travel and tourism, online startups TripAdvisor and Zomato have suddenly increased the discoverability of smaller tourist destinations and restaurants. Small boutique home-stays and resorts that could never have hoped to compete with established players have suddenly become a force to reckon with. The big callout is that these new-age entrepreneurs and companies are not just offering smart services; they are empowering communities and solving problems people face in day-to-day life. It’s not surprising then that most educational institutions now have entrepreneurship cells and students have begun pursuing entrepreneurship even before they graduate. There is no doubt that future business historians will refer to this decade as a watershed for entrepreneurship in India!

MS Subramanian currently heads the analytics function at Bigbasket. An engineer with an IIM-degree, He has an experience of more than 20 years in analytics leadership, Mani, as he likes to be called, is a frequent speaker in industry and academic forums as an analytics expert

T N Hari is an advisor and mentor to numerous young entrepreneurs and startups. He is also a Strategic Advisor at Fundamentum (a growth Fund set up by the doyens of the Indian Startup world). He heads the HR division at Big Basket and is now known as the start-up HR guy. An IITian and IIM graduate, he spent long years at Tata Steel, first as an engineer and then in HR.