Letters from Kitchens of the Yore

Letters from Kitchens of the Yore


Culinary diversity is one of India’s treasures and community cookbooks, both old and new, list not just recipes, but also traditions and rituals. These books present a symbiotic scenario of preserving the uniqueness of India’s culture.

In India, a famous Indian saying goes, “Kos-kos par badle paani, chaar kos par baani (the taste of water changes every kos or the ancient unit of measuring distance and so does dialect). What should be added to this adage is that the taste of food also varies every few kilometres. Food reflects the traditions of communities; from farming and festivals to rituals and beliefs. Food historians fear that altering lifestyles, travel, introduction to newer cuisines and the ease of availability of newer types of food, will push these cooking traditions of India into oblivion. However, there is a ray of hope, as community associations around the country document the traditional knowledge of recipes, cooking techniques and vessels in limited edition books.

These associations, often dating back to India’s pre-Independence era, are groups formed by members of different communities to preserve their traditions and cultures. They organise cultural events, religious festivals, food festivals and hold regular meetings, during which traditional dishes are always in focus. The food heritage, thus, gets preserved and passed on from one generation to another. It is this heritage that gets turned into books, which are printed in limited numbers and circulated among the community only. While some books are really old, having become pieces of heritage themselves, others are being written in the present.

Today, the East Indian Cookbook is considered incredibly valuable as there
is very little literature available about this community in Mumbai

One of the oldest of such books is Rasachandrika, published by Mumbaibased Saraswat Mahila Samaj in 1917. The original edition was in Marathi, which has been extremely popular. Thereafter, came the Hindi edition and finally an English one. Today, this book, with the charming painting of a Saraswat Brahman kitchen, is also available on e-commerce portals. The book documents classic recipes from the kitchens of the Konkani-speaking community, which is known for music, theatre, literature and its intriguing food. It is said that this community traces its history to the banks of the Saraswati, a mythical river from northern India and through the centuries the members of the community kept moving southwards. A reason why the cuisine, primarily vegetarian with a few fish dishes, includes flavours from across India. The book lists recipes according to vegetables, making it very handy to be followed. For example, a vegetable like tendli (ivy gourd) or banana flower is mentioned first and then four to five ways of cooking is listed. The book also has a section on major festivals and home remedies.

Another such gem is Samaithu Par by S Meenakshi Ammal, a guide to South Indian vegetarian cooking. First published in 1951, today it is available in three volumes. Originally in Tamil, the book is still being published by the author’s family in different languages. The book lists in fine details the recipes cooked in Tamil Brahmin households, even those served during shradh (funeral rituals), snacks made for weddings, offering to gods for various festivals etc. Priya Ramkumar, grand daughter-in-law of S Meenakshi Ammal says, “Meenakshi Ammal’s knack for cooking made her an informal guide for everyone in her family. People would write letters asking her about not just food but also rituals to be followed during traditional ceremonies. It was her uncle who suggested that she compile all these and publish it in the form of a book. Her writing is more like a grandmother’s advice. We are taking it online and also turning it into a video to make it more attractive to youngsters.” 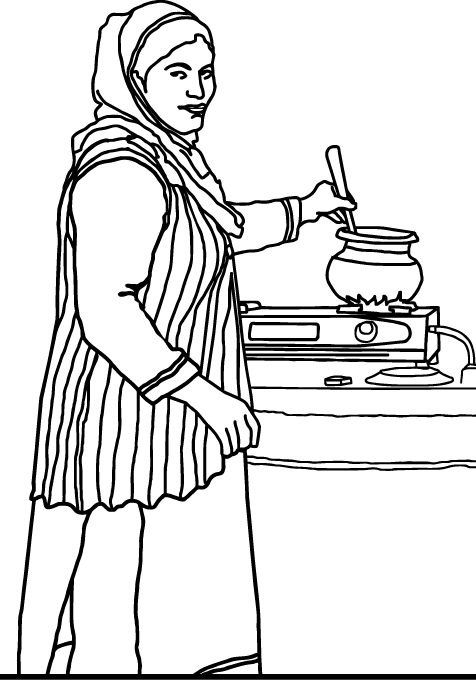 Also to be mentioned here are the smaller but equally important cookbooks written by the women’s clubs of various communities. Here are a few:

The Mangalore Ladies Club Cookbook is a delightful collection of 1,000 recipes, offering a variety of spices, baked delights and Mangalorean favourites along with a number of helpful hints on table setting, etiquettes and vegetable carving.

A more contemporary community cookbook is one that documents the traditions of another Mumbai community, the East Indians. Written by Dorothy Rodriques, the book details the food and culture of the East Indian Christians. Today, the book is considered incredibly valuable as there is very little literature available about this community. The Bombay East Indian Association has come out with the book which keeps alive their tradition of cooking. The famous bottle masala, vindaloo masala also finds a place amongst pages on the traditional cooking utensils. Along with the details on Dorothy’s book.Cassia Pereira, the author’s daughter, says, “In 2005, my father Teddie Rodrigues wrote a book Trace, which tells the story of the native Christians of Mumbai, known as East Indians. In 2008, my mother Dorothy Rodrigues released her first cook book The Salsette- Vasai East Indian Cookbook Part-1, which was followed in 2012 with the second volume. These books are a treasure trove of authentic East Indian recipes.” A tome that was compiled specifically for a community whose children have been increasingly settling abroad is Dadima na Varso – a storehouse of recipes from the Palanpuri Jain community. The book had been put together with a lot of attention to detail and research by Nita Shailesh Mehta, Rajul Ajay Gandhi and Dr Satyavati Surajmal Jhaveri of the Rachana Group of Women. The book offers an exhaustive list of dishes, ingredients, diets, herbs etc from this community, that is famous for its business acumen. The book also includes a recipe to make chyawanprash (an Ayurvedic medicine). I was told by a member of the community, “blindly follow what is written and you will get your chyawanprash.” From recipes of rotis (Indian flatbread), vegetables to crisps, rejuvenating food through the ages to an exhaustive glossary, the book, written in Gujarati and English, is worth its weight.

Samaithu Par by S Meenakshi Ammal, a guide to South Indian vegetarian cooking
is still being published by the author’s family in different languages

Another Jain community, the Sheherwalis of Bengal, lists its traditional recipes in a book titled Royal Vegetarian Cuisine of Murshidabad. Authored by Pradip Chopra, the book documents the flavours of this community’s cuisine, which is a mix of their Rajasthani roots with influences from Bengal and the British era. The recipes include boondi (tiny fried dumplings) made from black eye bean powder, raw mango pudding and a delightful curry made using cucumber and capsicum! Pradip Chopra, president the Murshidabad Heritage Development Society, says, “The recipes of the Sheherwali community are among the finest Jain vegetarian food. We wanted to preserve these for posterity. The recipes are from the elderly in the community and family cooks.” Listing not just recipes, but also traditions and nuances of rituals, these books go a long way in preserving the uniqueness of India’s communities and are valuable to food historians, chefs and authors. Written in simple language, mostly in colloquial terms, these tried and tested recipes are no less than heirlooms. In a country where tradition and heritage is spread orally, such written recordings will catalogue customs and traditions for the future.

Chitra Balasubramaniam has a passion for searching and writing about lesser known, unheard and unusual food and her quest to make them mainstream. An equity analyst by profession she pursues writing on textiles, architecture and heritage.