At a time when we are celebrating 150 years of Mahatma Gandhi, it is fair to say that Gandhism has stood the test of time. Through the years, be it Nelson Mandela or Martin Luther King, Jr. Gandhiji was always a template to understand and tackle their respective challenges. Today, we analyse how the Mahatma’s values have remained relevant in a contemporary world

In the teachings of Mahatma Gandhi one finds ready roadmaps to meet several challenges. Gandhi saw politics as a vocation that sought to serve humanity through principles and practices that were rooted in truth. Today, violence appears to be the greatest of all the perils that threaten our existence. In every part of the globe, governments and international agencies are busy devising strategies to tackle violence, religious extremism, widespread anarchy and terrorism. And for truth to be the guiding leitmotif in every policy that societies and governments promulgate to uplift the downtrodden, empower the deprived and guarantee universal justice, violence should find no part in those schemes: neither as a mean, nor as a temporary strategy. For Gandhiji, truth and violence are fundamentally antithetical to one another. Therefore, taking resort to violence, even for a fleeting moment, may amount to embracing untruth. This, in turn, implies loosing sight of the larger objective of serving humanity.

Gandhiji was as an idealist crusader who found no reason to isolate the methods from the goals; he believed that noble objectives can only be accomplished through noble means. At the same time, we must realise that Gandhiji’s commitment to truth and nonviolence was more than a philosophical commitment to a set of abstract ideas. He belonged to a family of administrators from the princely state of Rajkot and on account of that affiliation, from an early age, he was well-versed in the necessities of statecraft. Not even once during his illustrious political career did he underrate the centrality of state to the well being of its citizens. The practices and methods of Gandhian politics, specially those aimed at curbing the various forms of violence that we see in the world, create a regime of peace which is truly lasting and sustainable. Reflecting on the question of violent political confrontations of his own times, Gandhiji argued that getting rid of a man who obstructs him will only produce a sense of security that is both false and short-lived. On the other hand, engaging with one’s detractors and studying grounds of disagreement will produce a lasting truce. Gandhiji’s policy of debate and dialogue, when invoked in situations of global terrorism and trade conflicts, will eventually produce international cooperation, and a sustainable and conflict-free world order. 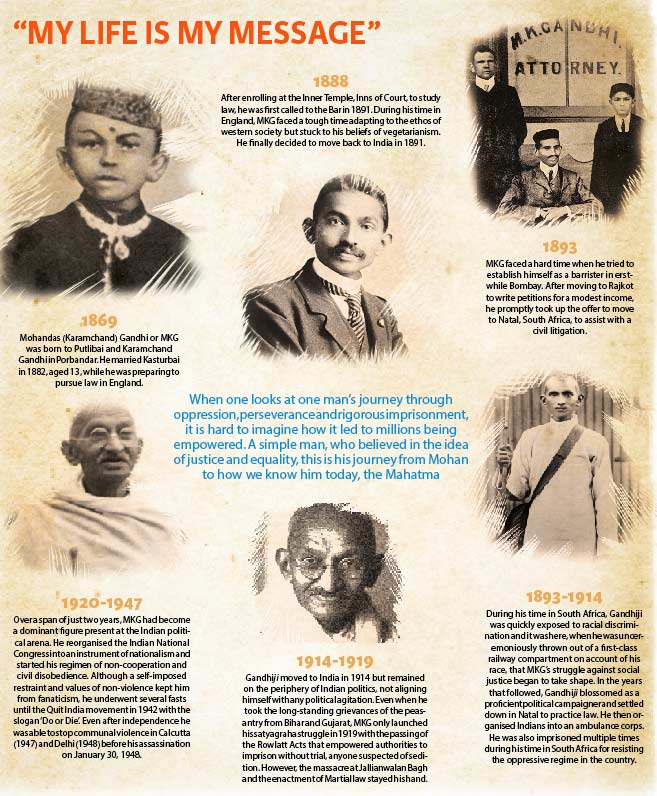 Undoubtedly, environmental crisis is one of the gravest of all problems that our generation faces. It is a commonplace wisdom that the present crisis is a result of reckless exploitation of nature. It originates in a mercantile philosophy which misled people into believing that our success at deciphering a few of its laws was a sufficient enough proof of man’s dominance over nature. According to E F Schumacher, modern economies and developmental models have treated nature as an expendable income and that “modern man does not experience himself as a part of nature but as an outside force destined to dominate and conquer it”.

Gandhi never subscribed to the idea of men waging war against nature. He held a quasi-religious attitude, which was premised on the theory of both empirical and transcendental continuity between human societies and environment. This quasi-religious worldview is informed by environmental ethics found in texts from ancient India. It is rooted in texts like the Athrvaveda which proclaim that earth is our mother and we are her sons.

In Vedic philosophy, our interaction with nature is guided by considerations of balance and man’s inextricable bond with his environment. The tales of Panchatantra repeatedly remind us that “if one hopes to reach heaven by cutting trees and by slaughtering animals, what is the way to hell?” In ancient Indian literature, we find an attitude of empathy for each element in man’s environment – man, animals, plants, rivers, mountains, soil and such. This attitude led to a culture wherein cutting a tree got compared to betraying a friend. This belief system, in which nature is projected as an intimate member of an extended family, precipitated an ethic of consumption which was not exploitative, but recuperative and regenerative. In January 1910, when residents of Paris were stunned by what is described as ‘the flood of the century,’ Gandhiji wrote a piece for Indian Opinion (a newspaper he established) decrying reckless tinkering with nature and its laws. He argued that event though the people of Paris harboured the illusion that they had built the city to last for ever, nature has “given a warning that even whole of Paris may be destroyed.” For Gandhi, the word prakriti implied the original character of an idea or a thing. When men tinker with prakriti, they corrupt both environment and themselves.

If we return to Gandhiji’s idea of prakrit, and through him to the ancient Indian environmental ethics, we are sure to find strategies and moral courage to tackle the environmental crisis.

Gautam Choubey is an academician, columnist and translator. He teaches English at Delhi University and writes on Gandhi, cultural politics and Indian literature.

The Swami’s progress
×
Tweets by MEAIndia