In the 21st century, despite advances in sea, air and rail transport, roads remain can be called the nerve centre of the Indian economy. The National Highways Development Projects(NHDP) are being implemented by the National Highways Authority of India (NHAI) over seven phases. As the largest development project in the country since 2000, more than 49,260 km of the roads are being upgraded to match international standards.

Human history abounds with examples of human migration involving transport of men and materials from time immemorial pointing to the importance of means of transport. In India, the same importance falls upon the 115,400-km-long (approximately) network of National Highways.

NHDP- THE PROLOGUE TO DEVELOPMENT

In India, a direct contributor to the staggering growth in road infrastructure has been the National Highway Development Project (NHDP). Started in 1998, the project aims to upgrade, rehabilitate and widen major highways in India in order to meet it’s transportation needs and boost economic development in the country. The project was managed by the National Highways Authority of India (NHAI) under the suzerainty of the Ministry of Road, Transport and Highways (MoRTH).

The Golden Quadrilateral (GQ), the largest highway project in India and fifth in the world, connects India’s four major metropolises in the four cardinal directions: Delhi (North), Chennai (South), Kolkata (East) and Mumbai (West). Planned under the NHDP, it was inaugurated in 2001 and finished in 2012, it passes through the 13 states of Andhra Pradesh, Bihar, Gujarat, Haryana, Jharkhand, Karnataka, Maharashtra, New Delhi, Odisha, Rajasthan, Tamil Nadu, Uttar Pradesh and West Bengal. The GQ plays an important linkage in the Delhi-Mumbai Industrial Corridor (DMIC). The states under DMIC constitutes 41 per cent of National Highway network in the country including the 213 km expressway between Delhi-Haryana and Ahmedabad-Vadodara on NH-8 and Mumbai-Pune Expressway in Maharashtra. A study conducted in 2014 by scholars at Harvard on the Golden Quadrilateral’s impact estimates around 43 per cent increase in total manufacturing (formal/organised sector) along the Golden Quadrilateral can be attributed to the project since 2001.

More recent additions to the Indian Highway network are the Yamuna and Taj Expressways. The 165-km-long six-lane Yamuna expressway opened up in 2012 and has considerably reduced the travel time between the National Capital Region (NCR) and Agra. It further connects to the 302-km-long Agra-Lucknow or the Taj Expressway, the longest in India. Not unlike the Mumbai-Pune Expressway, ever since their commencement, the Yamuna- Taj region has seen an uptick in investment with the whole stretch along the Yamuna Expressway bustling with real estate activity. Another example which resonates the success of this upgradation is the huge interest from major players willing to invest in automobiles, textile and agro-tech sectors under the Yamuna Expressway Industrial Development Authority. 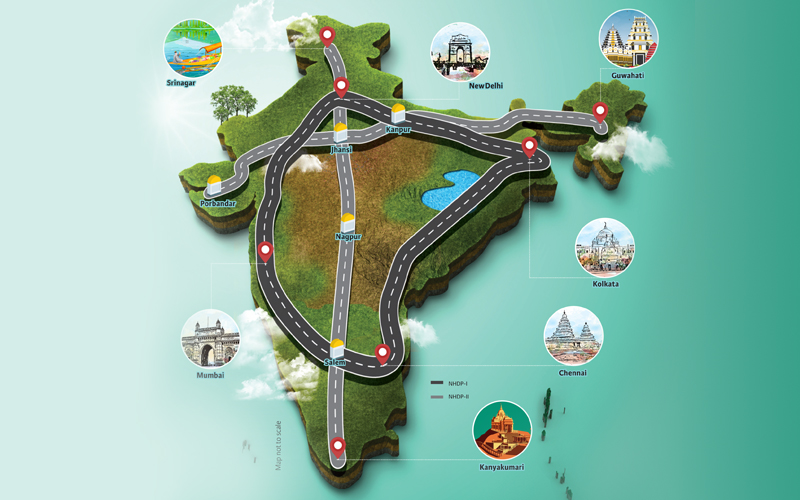 In October 2017, the government cleared the Bharatmala Pariyojna (Indian Garland Project), a centrally-sponsored umbrella road infrastructure project that subsumes all highway projects including the NHDP. With an estimated 83,677 km of road construction and an investment of INR 6,92,324 crores (USD 96 billion) from 2017-2022, it is one of the largest outlays for a road infrastructure project. Bharatmala Pariyojna aims to connect 550 District Headquarters through four-lane highways by raising the number of corridors and move 80 per cent freight traffic to National Highways by interconnecting 24 logistics parks, 66 intercorridors (IC), 116 feeder routes (FR) and 7 Northeast multi-modal waterway ports. The project seeks to improve connectivity, particularly on economic corridors, border areas and far flung areas with the aim of quicker movement of cargo and boosting exports. The project, as per the estimates, is expected to create nearly 100 million man days of jobs during construction activities and subsequently 22 million jobs as a result of the increased economic activity across the country.

The once ‘Look East’ policy has now become Act East policy with a sizeable transport connectivity aspect as its component. South and Southeast Asian nations account for more than 40 per cent of India’s trade. India, a signatory to the Asian Highway Network Agreement signed in 2003, is home to more than 27,000 kms of the planned road network. Over the past few years, India has actively taken up numerous connectivity improvement projects with its immediate neighbours as well. The IMT (India– Myanmar–Thailand) Trilateral Highway or the East-West Economic Corridor is 3,200 km long, connecting Moreh, India (Manipur) with Mae Sot, Thailand, via Myanmar. With less than 400 km in its final stages of completion, the route is expected to boost trade and commerce in the ASEAN–India Free Trade Area, as well as with the rest of Southeast Asia. India and ASEAN plan to extend this route to Laos, Cambodia and Vietnam. Estimates suggest that by 2025, this connectivity will generate USD 70 billion in incremental GDP annually and 20 million in incremental aggregate employment. If India wants to be a USD 20 trillion economy, then the focus on infrastructural development must not be lost. The Indian government’s dedication towards infrastructure development, specifically road related infrastructure, has been a resounding success over the last decade. This change has fuelled massive strides towards the development of India’s economy, by providing robust solutions to logistical bottlenecks and making travelling easier and more comfortable for the average Indian.

A graduate of Columbia University and London School of Economics, Patanjali Pundit is a historian, writer and entrepreneur.