A- A A+
Mission Corner
Partnership


With a busy schedule of international visits aimed at improving diplomatic relations, Indian External Affairs Minister S Jaishankar arrived in Beijing for the 2nd India – China High Level Mechanism on Cultural and People-to-People Exchanges in August. Former ambassador Gautam Bambawale explains why this visit is of utmost importance to India

The external affairs minister for India Dr S Jaishankar, arrived in Beijing, China on August 11 for a three-day visit (August 11-13). The second day of the visit (August 12) was its focal point, when the EAM first called on Chinese Vice President Wang Qishan, then had discussions with the State Councillor and Foreign Minister Wang Yi, co-chaired the second India – China High Level Mechanism on Cultural and People-toPeople Exchanges and delivered a keynote address at the fourth India – China Media Forum.

The Chinese Vice President Wang Qishan and the Indian EAM discussed global developments including the rise in multi-polarity throughout the world, particularly with the increasing number of developing countries. They also spoke to each other about the stability that is induced in the South-Asiatic region with regard to the India-China relations in a fast changing international environment. In this regard, the Wuhan Informal Summit between Prime Minister Modi and President Xi Jinping in April 2018 had made a major contribution to imparting stability and balance to this important bilateral relationship.

In their meeting, the two foreign ministers began their conversation from the consensus in bilateral relations that differences should not be allowed to become disputes and that both sides should be sensitive to the concerns of the other. In this light they discussed the historic Wuhan Informal Summit having imparted a positive direction to the bilateral relations between India and China. They made preparations for the second Informal Summit held in Mamallapuram, Chennai (October 11-12, 2019). They also discussed how the two nations would celebrate the 70th Anniversary of the establishment of diplomatic relations in 2020 with 70 events spread over the year in both countries.

Both these events are likely to be monumental towards enhancing India – China ties and would provide further depth, ballast and energy to them. The Informal Summit format is an innovation to diplomatic practices contributed by the two countries. At the first Summit in Wuhan, the two leaders had ensured that the Indo-Chinese border regions remained peaceful which is an essential prerequisite for enhanced bilateral engagement. The leaders from both countries had also engaged in strategic communication at Wuhan and continued the same at the second Informal Summit this year.

The Chinese Foreign Minister Wang also brought up developments pertaining to the Jammu and Kashmir region and the legislation passed recently by India’s Parliament in this matter. Dr Jaishankar conveyed to his Chinese counterpart that Article 370 of the Indian Constitution had been a temporary provision and had now been revoked. A move that was aimed at spreading growth, development and progress achieved across the country to these parts of India as well. He also highlighted that this was purely an internal or domestic matter for India which has no implications for the external boundaries of our country or for the Line of Actual Control (LAC).

The decision to establish a High Level Mechanism on Cultural and People-toPeople Exchanges between India and China was agreed upon at the first Informal summit in Wuhan as it was felt by both leaders that this is a relatively weak link in the bilateral relationship which needed boosting. The first meeting of this mechanism had taken place in December 2018 at New Delhi when former EAM Sushma Swaraj had co-chaired it with Minister Wang. This was an excellent start that was built upon at the second meeting in Beijing. It is possible and highly likely for India to increase significantly, the number of Chinese tourists visiting our country if India can embark on a sustained, regular and well-focused campaign to market “Incredible India” in China. Each year, 150 million Chinese tourists visit foreign countries and it is a very real possibility to attract 1 per cent of this number or 1.5 million Chinese tourists to India if we were to advertise our country systematically and effectively.

The Government of India has recently launched a ‘Study in India’ programme aimed mainly at Asian and African students. If India can market its university education particularly in Computers and Information Technology, a significant number of Chinese students can be enlisted to study in India. Just as Bollywood has recently made an impact in the Chinese market with the success of Indian films such as Dangal, Baahubali and HindiMedium, an increase in the number of Chinese tourists and students in India can help build more trust and understanding between residents of the two nations. The ministers also agreed on an additional 100 activities to further strengthen people-to-people ties. The media plays an extremely important role in fashioning narratives and impressions in people’s minds and is, therefore, an important tool for creating the right climate for diplomatic relations. Hence, the 4th High Level Media Forum which took place during the Indian EAM’s visit was of great significance. The media teams from each country were able to interact in a candid, forthright and open manner with each other.

Overall, the EAM’s visit to China was not only comprehensive and timely but also built on the consensus to move the relationship between these two Asian giants to one of stability, predictability and sustainability. The objectives for the visit were met completely.

Gautam Bambawale is an Indian diplomat and has served as the Indian Ambassador to Bhutan, Pakistan and China. He is currently a distinguished professor at Symbiosis International University, Pune. Bambawale is a subject expert on India's foreign policy in relation with Pakistan, China and the Indo-Pacific region.

India’s first UNESCO World Heritage city and Gujarat’s largest, Ahmedabad is a paradise for tourists. With its 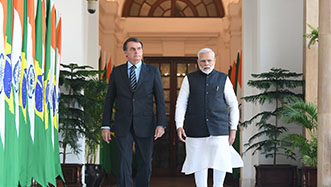 More than Just a star
×
Tweets by MEAIndia