Ishita Goel is a New Delhi-based journalist. After a brief stint with the Indian Express, she has been actively writing on disciplines across Indian heritage and current affairs

A 500-year-old living tradition that tells the tale of the ingenuity of the weavers of yore. A luxurious yardage that hides in every warp and weft stories of kings and communities, of battles fought and kingdoms lost. That’s the heritage of mashru, a vibrant handwoven traditional textile that once flourished in Gujarat. A specialised mix of silk and cotton yarns, mashru, at one time, was the favourite of the royalty and the elite of the region.

Offering the lustre of silk on the outside, mashru has cotton on the inside, making the wearer feel comfortable. Known for its jewel colours and bold stripes, mashru was a popular fabric for clothing in its heydays.

It finds a stronghold in the state of Gujarat, where it was widely woven in areas around Patan and Mandavi. Used to create kurtas, sarees and lehengas, mashru has a golden history that faded over time. However, today, the simple yet elegant textile is being brought back into the limelight, revived by the efforts of a few fashion designers. 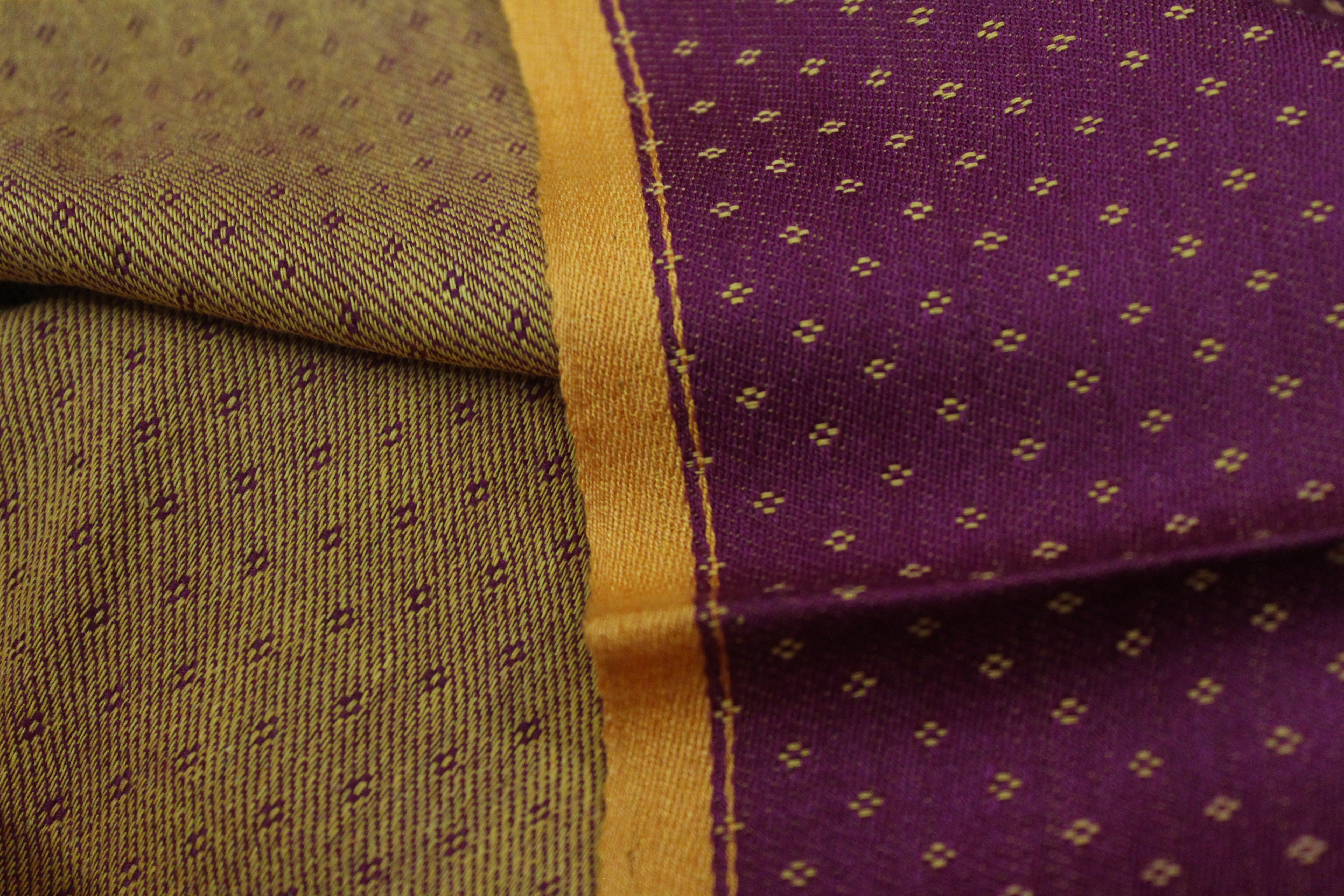 During the 16th century, the mighty Ottoman empire, which was spread across the Middle East, traded extensively with merchants in Gujarat. Along with spices, grains and sundry wares, the most prized commodity that was exchanged was silk. Its mesmeric sheen made it popular among the Islamic nobility of the empire. However, many of them believed that silk should not touch their skin. Also, it was an uncomfortable fabric to wear in the heat of their arid land. Crafting a solution to this challenge, the ingenious weavers created mashru, a fabric that enabled people to honour their beliefs and feel comfortable, while being dressed in the sheen of silk.

Mashru uses silk yarn in its warp (vertical threads) and cotton in the weft (horizontal threads) fabric. The name mashru, derived from Persian, means allowed or permitted. Some say, it’s derived from the Sanskrit word mishru, meaning mixed. Woven in a wide range of brilliant colours like green, red, yellow and indigo, mashru eventually became a symbol of luxury.

As the opulent dynasties of that era crumbled to dust, their arts and crafts were also lost in time. In between, the weavers started weaving plain mashru fabrics for local tribal women, who used to stitch them into chaniya-cholis (skirt with a blouse). But that too declined, as cheaper man-made fabrics became popular. Today, the weaving of mashru on pit-based handloom is practiced by very few families living in Patan, Gujarat. Hasan Kaka, is one of the few artisans who are still weaving mashru on a handloom.

Inside Hasan Kaka’s dimly lit workshop, work starts at dawn every day. He is helped by his three sons, all of whom have a target to weave at least 3 m of fabric in one day. “There are several types of mashru weaves. While kataria mashru has coloured stripes obtained by using different warp threads, danedar is a dotted pattern in which four extra shafts are added to the loom,” explains Muhammad Zubain, Kaka’s son.

“It takes about one and a half months to complete a stretch of fabric,” says 72-year-old Hasan, adding that a saree can take up to three months to be ready! “The work is tedious and the money we get is very little,” he says, a reason why he is reluctant to let his sons pursue the craft.Compared to today’s scenario, when there are hardly 25-30 weavers left in Patan, the picture of a few decades ago when almost 400 weavers worked in rhythm to produce colourful fabrics in the stark desert, seems hard to believe. Yunus bhai is the owner of Gamthivala, a small colourful shop set right in front of Rani-no-Hajiro, a popular tourist site in Patan. “During my grandfather’s time, our family made its fortune by selling mashru. From one tiny shop, we expanded to three plush stores, all thanks to the demand of the fabric. However, today, no one asks for it. But I am afraid that if the scenario doesn’t improve, in a few years, mashru will only be seen in museums.”

A ray of hope

However, all is not lost as customers, especially in urban India, are slowly recognising mashru’s magic. A few local designers have started experimenting with designs and colours and are also complementing the base fabric with tie and dye and block printing designs that are much appreciated in local markets.

One of the more popular designers experimenting with mashru is Sanjay Garg, of the label Raw Mango. His work with “the most luxurious fabric in the world that was worn by the royals” has endeared it to many buyers and is bringing this heritage gem into the limelight.

In Delhi, fashion connoisseurs sat up and took notice when Garg showcased mashru kurtas, lehengas and even contemporary pants at the Amazon India Fashion Week’s (AIFW) Spring Summer 2016 edition. Exemplifying what the modern Indian woman wants, his models walked down the runway draped in gorgeous attires that had the grace of tradition but were eased down so as not to make them fussy. The fact that cotton made the fabric more wearable did not go unnoticed by the awed audience. Mashru scored with the Indian buyer on three major counts – ease of wearability, simplification of busy designs and its gorgeous fluidity.

Speaking about the future of mashru, Garg says, “The future of mashru lies in the interest among the weavers’ communities, and it is growing over the past decades. Out of all my collections, mashru is the closest to my personal DNA, especially the Abha kurta that I revisit from time to time for inspiration.’’

Garg has drawn the patterns and the tones heavily from the weave’s heritage while giving contemporary cuts and structures, making the mashru pieces rare and more attractive.Craftroots, Gujarat, a unique platform that creates mashru home interiors and textiles, started its journey with the fabric in 2001. “Our sarees, home decor items and men’s garments are sold all over India and even to foreign countries,” says Raju Thakor, a spokesperson. “Mashru is a very rich fabric. It takes seven intricate steps to produce a perfectly glistening piece and even if one of them is missed you can’t get the best quality. The making of mashru is as mesmerising a process as the final product.” As mashru pieces fly off the shelf , it seems that this heritage weave is on a rise once again.

Ishita Goel is a New Delhi-based journalist. After a brief stint with the Indian Express, she has been actively writing on disciplines across Indian heritage and current affairs