A visit to remember

A visit to remember


Museums serve as more than just portals to the past. They preserve the remnants of the bygone era for posterity and offer a glimpse of the country’s glorious history - be it musical, monetary, military or cultural. On the occasion of International Museum Day (May 18), we bring you some of India’s most unique museums

This unique museum was setup by the Reserve Bank of India (RBI) to capture the journey of the monetary system in the Indian subcontinent. The interactive exhibits that range from coins and paper money to e-money allow visitors to view and understand the evolution of currency in the country over millennia. The displays also acquaintvisitors with the various systems of barter, trade and commerce that flourished over the years. One of the main attractions of the museum, which also organises informative quizzes and slide shows for children, is the coins section thatdisplays coins dating back to the 6th century BC. Entry is free and the museum is closed on Mondays

This unique museum, touted to be the first- of-its-kind in South Asia, is housed inside a real submarine! INS Kurusura Submarine, a Soviet built-I-641 class submarine, was inducted into the Indian Navy on December 18 ,1969, and was decommissioned after 31 years of glorious service on February 28, 2001. The museum chronicles the milestones, achievements and services rendered by the submarine to the nation through a stellar display of artefacts, photographs and written scripts. The tour guides of the museum are retired officers of the Indian Navy who offer visitors an immersive experience of life in a submarine. Various parts of the submarine like the radar room, sonar room and control room are on display in this museum, which is closed on Mondays

Take a drive down the annals of India’s transportation history at the fascinating Heritage Transport Museum, where avintage Morris Minor serves as a reception desk, motorcycle handlebars are used as door handles and headlights are positioned as room lights. Located at Taoru, near Gurugram, Haryana, this museum is curated by automobile enthusiast Tarun Thakral and is a visual treat for all ages. From vintage cars, scooters, buses and a railway coach to bullock carts, horse carriages, palkis (palanquins) and a 1940 Piper J3C Cub aircraft dramatically suspended from the roof, the museum takes you through the heritage of Indian transportation, with around 2,500 vehicles and associated memorabilia on display.

Sarod Ghar, also called Sarod Museum, is a haven for aficionados of Hindustani classical music. It displays instruments of some of the mosticonic and illustrious figures of Indian classical music. From the sarod (string instrument) of renowned sarod master Ustad Haafiz Ali Khan and the surmadal or swarmandal (an Indianised version of the harp) belonging to legendary artist Ustad Bade Ghulam Ali Khan to the violin of noted multi-instrumentalist Ustad Allauddin Khan and the ghungroos (strings of small metallic bells tied to the ankle while performing Indian classical dances) of kathak doyen Pandit Acchan Maharaj – this museum is a treasure trove of India’s rich artistic heritage. Musical events and live performances are regularly organised here. In fact, the central courtyard is designed as an open-air auditorium for the latter. The museum is closed on Sundays

The Partition of 1947 is one of the mostdefining moments in the history of the Indian subcontinent. It notonly saw the largest migration known to mankind but also affected over 150 million people. The Partition Museum, housed in the historic Town Hall building in Amritsar, comprehensively charts – through photographs, memorabilia, official documents and paintings – the events that led to the Partition and the consequences that followed. Audio-visual stations are setacross the museum’s 14 galleries. The highlights of the museum are the artefacts donated by the families of survivors as well as the life-size replica of a train station and, on the platform, the objects carried by refugees on their journeys. The museum, which is closed on Mondays, is making efforts to collect more artefacts, including oral histories, documents and footage associated with the Partition, to enhance the experience of visitors.

The Kiran Nadar Museum of Art (KNMA) is oneof India’s first private artmuseums. When it opened doors in 2010, itwas among a handful of art centres/ museums in the country where visitors could enjoy the works of celebrated artist Jamini Roy (1887 -1972) and noted 20th-century sculptor Anish Kapoor under one roof. While the museum’s core collection highlights the magnificent works of 20th-century Indian painters, including those belonging to the post- Independent decades, it also equally engages in the varied art practices of the younger contemporaries. The museum showcases the works of such renowned artists as Dayanita Singh, Himmat Shah, Jeram Patel and KG Subramanyan. It also organises engaging talks and discussions with some of the most influential voices of the artworld.

Claimed to be India’s first 3D interactive ‘trick art’ museum, the Click Art Museum is an interactive space where the exhibits are aptly called trick art or optical art– two-dimensional images thatplay with the illusion of a third dimension when seen from a certain angle. Take a picture with a chimp, accepta rose from Charlie Chaplin, receive blessings from Mother Teresa or evade a kick from Jackie Chan – let your imagination run wild and free here. And unlike any other museum, visitors are permitted to touch the exhibits and even pose with them. This fun-filled museum has about 24 such engaging exhibits curated by AP Shreethar, who is an artist himself. The trip of the museum begins with a quick tutorial regarding how to position oneself and the camera for maximum effectof the illusions. 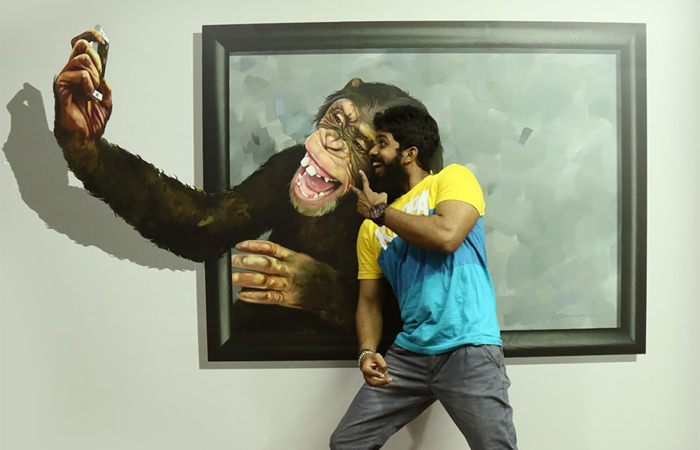 Located inside the beautifully restored Chanwar Palkiwon ki Haveli near the historic Amer Palace Fort, this unique museum is dedicated to hand block printing. The exhibits display a varied selection of block printed textiles thatportray the evolution of block printing in the textile town of Sanganer in Rajasthan, associated images, tools and related objects – all curated to offer an in- depth look into the intricacies of this ancient craft tradition. Highlights of the museum’s permanentcollection include a range of natural and chemical processes like the traditional dabu or mud-resist printing, gold and silver embellishments, and wooden and brass blocks with carving tools. The main attraction here, however, is the archive section thatacts as a rich repository of clothing and home furnishings dating from the early 1960s to the present day.

A graduate of the Indian Institute of Mass Communication, Shrabasti Anindita Mallik has worked with MyCityLinks, a Bhubaneshwar-based tabloid, and New Delhi-based The Pioneer newspaper. She actively writes on travel, Indian culture and traditions, music and any subject that intrigues her.