A tale on two wheels

A tale on two wheels


It has long been maintained that in the details of our vast country lie its true vibrant colours. Piya Bahadur charts her journey from being in a sedentary job to an adventurous trailblazer and how motorcycling can be the best way for an in-depth exploration of any country and yourself

Any decision that we make today is based on a general agreement that we think we will get from the world for it. Seldom do we remember to take into account our own consciousness and the effect of our decisions on it. I have understood, especially after travelling solo across some of most scenic destinations in Asia, that the satisfaction of my own self will always make me feel better about my decision and in turn, myself. Thus, when the opportunity to be part of a four-woman motorcycle expedition from Hyderabad to Vietnam (and back) came by, it seemed almost unreal. Visiting our neighbours by landing at an airport and taking a guided tour was doubtlessly interesting but driving through the cities and the rural countryside sounded so much more challenging. Riding 400 cc motorcycles tearing up the road under you, through six countries, covering around 17,000 km on the, newly laid India-Myanmar-Thailand Trilateral Highway seemed like an adventure of a lifetime.

Until then, a few days’ worth of riding on open highways was as far as I had allowed myself to try. Long years of being a mother, an employee, and a wife had muffled my risk-taking soul. “Don’t rock the boat” had become the credo I lived by. I went home that evening in two minds: one willing me to turn myself loose, the other frowning at my frivolity. My reservations and inhibitions lingered on till unexpectedly, Aditi, my elder daughter asked why I wasn’t packing for the trip. “Go big or go home” her gaze seemed to say, as she playfully waggled her eyebrows at me. I knew, at that very moment, that my first step was going to be the hardest, it simply had to be the proverbial leap. The full import of my daughter’s words came back to me a few weeks later, when well into the ride, we stopped under a tree one evening in a pristine, dark forest nestled in the Arakan range in western Myanmar. This time, at home, I would have been getting dinner ready on the table. But, here, in this beautiful country, I thought about the day I decided to be a part of this expedition. When I decided to no longer be limited by anything — be it societal norms, imagined duties and responsibilities, handicaps of age and fitness, circumstances of exam timings or, most insidiously, the fear of appearing to be selfish.

Our journey was in itself an experience – for the first time in life I had no worries about my destination, I was absorbing as much as I could with each passing kilometre and rejoicing that there were almost 17,000 km in total that I had to cover. Wrestling with a 400-cc motorcycle mired in the slush focuses your attention like nothing else. It was an amazing journey, through the massive network of national highways, through the diversity along the iconic highway dhabas and sharing gossip with the locals and truckers. We soaked in India’s beauty along rivers and on misty roads. Of course, in an eight-week journey I had expected some days to not go well, but what I had not factored in was that these bad days were what would actually build my resolve. One aspect which remained constant was that we were met with curiosity and hospitality almost everywhere we went, always feeling welcome, never unsafe.

When we were about 2,800 km from Hyderabad, where our journey had begun, and 300 km from the small outpost on the Indian border, Moreh – the gateway into Myanmar, we heard voices screaming “Indoh! India!” We were in the midst of planning how to cover another 14,200 km, more than half of it in the Southeast Asian peninsula, through the Mekong basin, when this recognition of our nationality greeted us. A group of boys and girls were waving at us and cheering us. We waved back. Since then, we heard the phrase exclaimed several times as we crossed into Myanmar and rode into Laos, Cambodia and Vietnam. The cheers were always accompanied by a smile, a thumbs-up sign and much pointing to the tricolour pinned on our riding jackets.

We saw the unmistakable traces of our shared heritage as we crossed the Irrawaddy and the Mekong rivers. We felt it at the My Son monuments of the Champa dynasty, deep in Vietnam. We saw it in the ancient Buddhist sites of Bagan. At the ancient Hindu temples in the heart of Southeast Asia, so far away from home, I couldn’t help but be overwhelmed by the bravery of our ancestors and be reminded yet again that we indeed come from a proud lineage of intrepid adventurers.

After a Vietnamese newspaper published an article about our journey, a local bike club came to meet us on the outskirts and escort us into Ho Chi Minh city – we didn’t speak a word of each other’s language, but the camaraderie was unmistakable. I felt a deep confidence, riding as friends through familiar yet foreign lands.

It is always great to hear and read about multilateral initiatives aimed to bridge gaps and shorten distances across people and traditions. But, as I navigated these paths, my eyes scanning the horizon ahead, the wet road under my wheels, I realised that it was such journeys where you battle the elements, meet new people and exchange stories, that bring cultures together for a better tomorrow; filled with mutual understanding and compassion.

The changing landscapes- From the lush valleys of Chamba and Kinnaur, you head to the stark cold deserts of Spiti, Lahual and onward to Leh

Monasteries – Buddhist monasteries of Dhankar, Tabo (Spiti), Spituk and Sankar (Leh) are some of the oldest in India

From steep high-altitude climbs that take you to Tawang to the slick, rain-swept roads around Cherapunji, this trip has something for all riders

Must-see are some the most densely forested protected areas like the Cherrapunji-Mawsynram reserve forest, Nameri National Park and Pakke Tiger Reserve.

With winding roads that climb amongst the lush green landscapes of Ooty and the scenic waterfalls of Kodaikanal in Tamil Nadu, this southern sojourn is perfect for weekend getaways and a break from the monotony of your daily routine.

Ooty (short for Udhagamandalam), is a town in the hills of the Western Ghats and was originally founded as a British resort

Age old monuments like the Mysore Palace and the The St. Philomena’s Church

The delectable cuisine of Rajasthan is one of the most famous around the country. Be sure to try a bite!

Desert safaris in Jaisalmer that have you camping under the stars and amongst the massive dunes of the Thar desert.

The numerous forts and palaces in and around Jaipur, Bikaner, Jodhpur and Jaisalmer 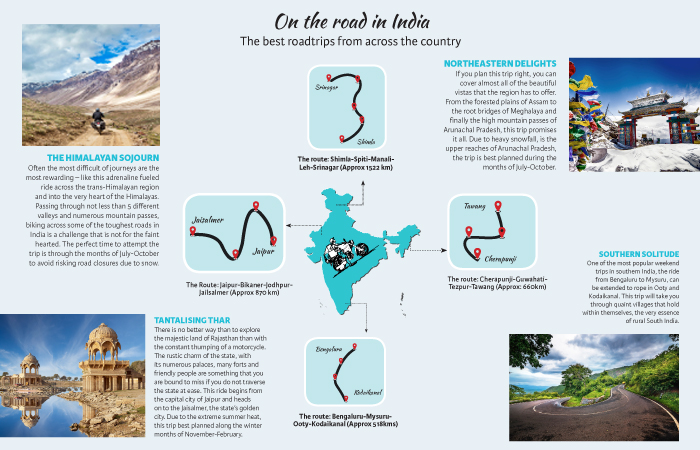 The 1,360-km-long India-Myanmar-Thailand (IMT) Trilateral Highway is an initiative pertaining to India, Myanmar and Thailand. It traverses from Moreh in Manipur to Mae Sot in Thailand through Myanmar. The Trilateral Highway has boosted trade and commerce in the ASEAN-India Free Trade Area.  It has also emerged as one of the most challenging road trips in the region. A complete circuit, along with the IMT highway goes on till Vietnam through Laos and Cambodia.

Piya Bahadur is the author of Road to Mekong, based on her motorcycle trip from Hyderabad, through the east Indian coast and the northeast of India, weaving through Myanmar, Thailand, Laos, Cambodia and Vietnam and her journey from being a working mother constrained by her own inhi-bitions to a confident traveller.